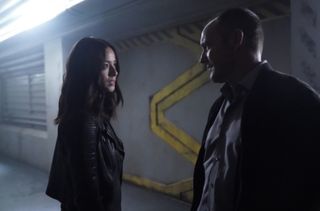 In advance of its season 5 premiere on Friday, the first 17 minutes of ABC's "Agents of S.H.I.E.L.D.'s" has been shared online. Take a look:

In addition to a tongue in cheek reference to S.W.O.R.D., the extended preview also reveals the identity of the aliens first seen in the trailer as the Vrellnexians.

Created by Gerry Conway and John Buscema way back in 1973's Thor #212, the Vrellnexians invaded Asgard.