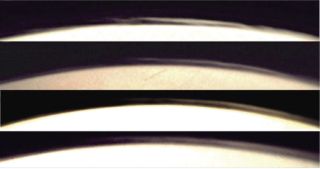 A webcam aboard a European Mars orbiter has snapped some striking images of big clouds scudding through the Red Planet's atmosphere.

That survey provides a new perspective on the planet's atmosphere, the scientists added: Whereas most other Martian orbiters' cameras zoom in for close-up looks at the surface, the lower-resolution VMC gives a wide-angle view of much of the planet's "limb," or edge. [Photos: Red Planet Views from Europe's Mars Express]

"For this reason, limb observations in general are not so numerous, and this is why our images are so valuable in contributing to our understanding of atmospheric phenomena," Agustín Sánchez-Lavega, lead author of a new study about the cloud photos, said in a statement from ESA.

By combining these observations with models and other data sets, the researchers gained a better understanding of "atmospheric transport and seasonal variations that play a role in generating the high-altitude cloud features," added Sánchez-Lavega, who's based at the University of Basque Country in Bilbao, Spain.

Originally, the main goal of the VMC was to confirm that Mars Express' piggyback lander, Beagle 2, separated as planned during the duo's approach to the Red Planet in 2003. (That separation occurred, but Beagle 2 went silent during its Dec. 25, 2003, landing attempt and was never heard from again. In 2015, researchers announced that they had spotted Beagle 2 on the Red Planet's surface, in photos taken by NASA's Mars Reconnaissance Orbiter, or MRO.)

The VMC was switched off shortly after doing that job. But mission team members turned the camera back on in 2007, and then used it to take photos for public-outreach and citizen-science purposes. (VMC images automatically post to this Flickr page, which features more than 24,000 photos at the moment.)

But last year, the webcam received some new software and was elevated to the status of supporting science instrument. The new study — which will appear in the Jan. 1, 2018, issue of the journal Icarus — is the first VMC-centered paper to be published during the camera's new incarnation, ESA officials said.

The team then compared the VMC photos with the results of Red Planet climate models, as well as with data from other Mars Express instruments and weather information generated via MRO observations. Such work revealed that most of the clouds were composed of water ice and were present when temperatures in their area were relatively low. (These clouds evaporated when things heated up.)

"This long-term monitoring has allowed us to detect and measure the extent of dust and clouds over the limb of the planet, and study changes with a high cadence of imaging," Dmitri Titov, ESA's Mars Express project scientist, said in the same statement. "We will continue to maintain the database with systematic observations from the webcam to provide wide views of atmospheric phenomena."