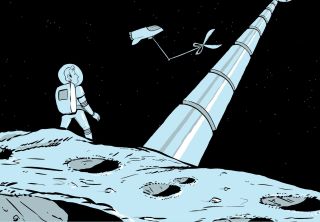 In their new book "Soonish" (Penguin Press, 2017), out today (Oct. 17), Kelly and Zach Weinersmith dig into 10 realms of future technology to see which will survive, which will likely flounder and which could change (or ruin) everything.

Zach Weinersmith is a cartoonist known for his often science-themed Saturday Morning Breakfast Cereal webcomic, and his wife, Kelly, is a podcaster and biologist at Rice University in Texas. Together, they delved into topics ranging from space elevators to asteroid mining to programmable matter and cold fusion, parsing primary sources and interviewing experts to find the coolest and most plausible future tech.

Space.com talked with Zach about the new book and which space technologies might be destined to make it big. [Best Space Books and Sci-Fi: A Space.com Reading List]

The Weinersmiths first envisioned the book as a quick rundown of 50 cool future technologies, directed at teenagers who might want to find something cool to get involved in working on. But they wanted to go more in-depth — and give more information than the Wikipedia article — and so the chapters got longer and longer as the explanations got more involved.

"The idea was essentially, if we're going to talk about something like reusable rockets, we don't just talk about why they'd be neat, we try to get a little into the weeds about the economics of what's in a rocket and what's expensive and what's not," Weinersmith said. "The idea is for every chapter, we try to start with first principles as much as we can and then build all the way up to a full understanding, and so I hope someone who is not necessarily a science geek but is willing to pay a little attention, peppered with jokes and comics, would enjoy it," he said.

"I like to think we're honest brokers for nerdy people interested in future stuff," he added. But the pair tried to have sufficient rigor in each chapter to get scientists on board, too: "We have nerd pride," Weinersmith said. "We don't just want a popular audience to like the chapter, we want the field we're discussing to feel we did them justice to the extent we could in the space allotted."

Weinersmith said that when it comes to space, the most plausible technology is reusable rockets, like the model SpaceX is planning now, at least in the short term. For the long term, though, a more environmentally friendly method, or at least cleaner fuels, might be needed, he said.

"I was just reading last week or something, Elon Musk was saying he's going to start a rocket transport company, and we'll be able to get wherever we want [on Earth] in an hour," Weinersmith said. "That sounds in principle great, but there's the serious environmental issue, which was — at least according to the people we talked to — the current propellant is pretty nasty. It doesn't matter because we don't launch that many rockets, but if you take a rocket ship every time you want to go to New York, or whatever, it might get pretty bad."

Weinersmith said that a spaceplane or an air-breathing rocket that could consume oxygen to propel itself on its way up would be another possibility, although "no one's quite pulled it off yet."

The book also explores technologies that are less promising, such as space-based solar panels that beam power back to Earth. Although a lot of researchers are excited about them, after talking with several experts the Weinersmiths ultimately concluded that while such a solar panel could pull in 40 times the energy of a ground-based panel, it would almost always be harder and cost more than just setting up 40 solar panels somewhere on Earth. Even a space elevator, which would make spaceflight much more cost-effective, probably wouldn't be enough to offset that difficulty.

And for each chapter, the book also steps into the bizarre: For spaceflight, it's the "pogo stick method" of space launch. Because so little of the rocket's mass is actually cargo, a slight decrease in fuel consumed can easily double the amount of cargo a ship can carry.

"The idea is you'd have a rocket, and you'd hold it up a little high … and you drop it and it would have springs, and as it comes back up you'd hit the gas and you'd go," Weinersmith said. "Because that's the hardest part to accelerate, because you've got the most mass, you'd get a nice little boost."

"If you understand the economics of rocket flight, which is to say the issue that your cargo is like a tick on a dog compared to the fuel, you'll understand why the pogo method is attractive — although it will probably never be used," he added. [Life in Space, 'Star Trek' Tech & the Future of Space Exploration]

Weinersmith admitted that while the spaceflight technology in his book is among his favorites, it probably wouldn't have as big an impact on humanity as some of the other concepts, such as brain/computer interfaces.

"If you have a colony on Alpha Centauri, but the people can still read Shakespeare and get it, then that doesn't feel that different to me; it feels like it's still humans who are just somewhere else," he said. "But with the brain-changing stuff, we're in a new universe now. We're not people anymore."

The authors made a point of not putting numbers on exactly when each technology might be feasible, but they tried to detail the steps needed for each to exist, the current state of the research and the obstacles still in their way. Some are already in motion, such as reusable rockets, and others are still much more experimental.

"Our joke was like, we'd be down to try any of these things, just wouldn't want to be the first to do it," Weinersmith said. The best material available for the space elevator, for example — carbon nanotubes — are about 1-1.5 times the required strength to hold onto a massive platform hurtling around the Earth, whereas an engineer would prefer to build something 2-3 times the strength needed. Plus, experts suggested riders might throw up once the acceleration slowed down near the top.

And as for Musk's proposed "rocket hop" between cities on Earth?

"I don't know how many g's they're expecting you to endure," Weinersmith said. "You take the roller coaster from hell, and then you're in Tokyo — I don't think I'm ready for that."

You can buy "Soonish" on Amazon.com or read more about it here.