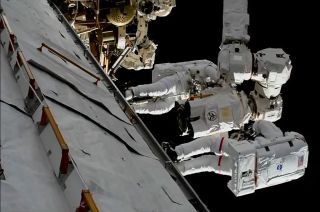 NASA astronauts Randy Bresnik (foreground, with red stripes) and Mark Vande Hei work to install a replacement latching end effector, or hand, on the Canadarm2 robotic arm outside of the International Space Station during a spacewalk on Oct. 5, 2017
(Image: © NASA TV via collectSPACE.com)

Expedition 53 crewmates Randy Bresnik and Mark Vande Hei, both of NASA, worked outside the International Space Station to swap out a malfunctioning latching end effector (LEE) from the Canadarm2 robotic arm. The LEE — one of two on the 58-foot-long (17.6 meters) space station remote manipulator system (SSRMS) — is used to attach the arm to the orbiting laboratory and to grab hold of equipment or spacecraft in proximity to the outpost.

Paolo Nespoli, of the European Space Agency, worked in the station to position the end of the robotic arm between Bresnik and Vande Hei, who then set about removing two thermal blankets and releasing the fasteners holding the 3-foot-long (1 m) faulty LEE, or "hand," freeing it from the assembly. [Gallery: The Most Memorable Spacewalks in History]

"All right, gentleman, we show a good arm," Mission Control radioed the spacewalkers once the spare was in place.

"That's great news, Houston!" exclaimed Bresnik. "There is much rejoicing."

The remainder of the spacewalk was spent attaching the degraded LEE to the POA, or payload/orbital replacement unit accommodations, on the space station's railcar, where the spare had been attached. Bresnik and Vande Hei also had time to achieve some "get ahead" tasks, including the removal of some thermal insulation blankets and preparing a spare hose for the space station's cooling system should it be needed for a future repair.

The faulty LEE will be moved inside the station early next year so it can be stowed in a SpaceX Dragon cargo capsule for its return to Earth. Once on the ground, it will be repaired and serviced, and then launched back to the station to serve as a spare.

Bresnik and Vande Hei ended the spacewalk back inside the Quest airlock at 3:00 p.m. EDT (1900 GMT), six hours and 55 minutes after they began.

The two astronauts are scheduled to venture outside the station again on Tuesday (Oct. 10), to begin lubricating the newly installed LEE and complete other tasks. A third EVA slated for Oct. 18 will pair Bresnik with Joe Acaba, also of NASA, to finish greasing the LEE, among other work.

The LEE maintenance will ensure the Canadarm2 is ready for its next major move — grappling Orbital ATK's Cygnus cargo spacecraft when it delivers supplies to the station in mid-November.

Thursday's spacewalk was originally planned to change out the Canadarm2's other LEE, which was showing signs of wear and tear.

"We've been tracking degradation in the Canadarm2 LEEs actually for some years now. Since these components are well beyond their design life, this really is expected wear and tear," said Tim Braithwaite, the space station program liaison for the Canadian Space Agency (CSA), in a briefing on Monday (Oct. 2) previewing the spacewalks. [Next-Gen Canadian Robotic Arms To Reach For Satellites (Video)]

The space station's flight controllers had been monitoring increased motor currents in both LEEs and had decided to replace LEE "B," but then the other side (LEE "A") stalled during a move of the arm, resulting in the change of plans. (The arm moves like an inchworm, with each LEE taking turns attaching to the truss as the other side reaches out to the next attach point.)

The Canadarm2 was added to the space station by NASA astronaut Scott Parazynski and Canadian astronaut Chris Hadfield during the STS-100 shuttle Endeavour mission in 2001. As the SSRMS was designed to be serviced, it was expected that the LEEs would need to be replaced before now.

"The end effector is designed to be replaceable, as is all the joints," said Braithwaite. "At 16 years and counting, for an item this complex, we're actually very pleased that both LEEs lasted this long. We thought we would be doing this maintenance before now."

Though this is the first to be replaced, a LEE was removed temporarily from the robotic arm during a joint replacement in June 2002. LEE B is planned to be replaced during a spacewalk in early 2018.

The Canadarm2, one of Canada's major contributions to the space station, was instrumental in the construction of the orbital complex. It is now used to berth visiting vehicles to the station, position equipment delivered by those cargo craft and assist with exterior repairs.

The spacewalk on Thursday was Bresnik's third — after two in 2009 — bringing his total time working in the vacuum of space to 18 hours and 45 minutes. It was Vande Hei's first EVA.

"And Houston, that might have been one small step for a man, but [it is] one giant leap for Sabot," radioed Bresnik soon after the spacewalk began, referencing Vande Hei by his call sign. "Congratulations my friend on becoming the 221st human to exit your own personal spacecraft into the void of space."

The spacewalk was the eighth EVA of the year and 203rd in support of space station assembly and maintenance.