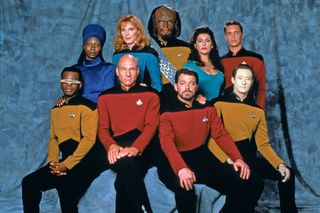 The cast of "Star Trek: The Next Generation."
(Image: © CBS Photo Archive/Getty)

Members of the "Star Trek: The Next Generation" cast entertained fans at Atlanta's DragonCon last week in honor of the show's 30th anniversary this year, sharing anecdotes from their shows and from their lives. The actors participated in panels on three of the convention days over Labor Day weekend.

DragonCon is a five-day convention that brings together thousands of science fiction and fantasy fans. "The Next Generation" panel included Gates McFadden, who played ship doctor Beverly Crusher, and Brent Spiner, who brought the android Data to life. They were joined by Marina Sirtis, whose brash humor contrasted the calm demeanor of her character, the empath Deanna Troi, and a mostly silent Michael Dorn, who brought the Klingon Worf to life. The panel was moderated by "Star Trek Voyager" actor Michael Wang.

The group spoke to hundreds of people in a ballroom filled to capacity. In addition to telling stories and bantering lightheartedly with one another, the group sang "Happy Birthday" to one of their fans, encouraging the room to join in. [The 10 Best Star Trek Episodes (Including All Network Series)]

One of the first questions fielded by the group involved "Inner Light," an episode where Capt. Picard experiences the life of an alien race wiped out by the death of its star.

"It was a beautiful episode," McFadden said. "Like so many episodes, it was really about appreciating the moment, appreciating life. That's something we all should do."

When asked about working with Howie Seago in a separate episode, Spiner praised the deaf actor, saying, "He was fantastic."

Another fan mentioned the episode Sub Rosa, voted by fans to be the sixth worst of any "Star Trek" episode during the franchise's 50th anniversary.

"It was very odd to discover my family and ancestors had been in love with a lamp for decades," McFadden said. "He was very good looking when he wasn't a lamp!" she added.

Enough fans asked about Data's cat, Spot, that the panel had to put a moratorium on questions about the creature.

"Which Spot do you mean? There were three of them, you know," Spiner said. "I think they're all in Spot heaven at this point." His comment led the group to debate whether a cat could have survived the 20 years since the show wrapped up.

When asked to recite Data's "Ode to Spot," a poem written by the android, Spiner managed the first two lines, to audience applause.

Sirtis revealed that she had a "yellow-eyed cat that I called Data," as well as a black cat she called Biko, named for the South African anti-apartheid activist Stephen Biko. She admonished the silent room when no one seemed to recognize the reference.

When asked about favorite villains on- and off-camera, Sirtis said, "I hated anyone — and it was always a guest star — who came unprepared and didn't know their lines."

"I wanted to punch them in the face," she said.

Spiner took a different perspective. In an emotionless voice, he said, "Data did not consider anyone a villain. They were all just people, good people. The Borg were sweet in their own way." He and Sirtis named the Borg, an alien cyborg race, as their favorite on-camera villains, with Spiner crediting "Next Generation" writer Maurice Hurley with that "really brilliant stroke."

Dorn said, "I don't really hate anybody," which prompted Sirtis to say, "Yes, you do! You hate one person." When Dorn look confused, she whispered a name to him.

As for McFadden, she was extremely definite. "Spot is my favorite villain on screen," she said. [The 15 Best Ships on Star Trek, from V-ger to the USS Vengeance]

According to the group, life behind the scenes was extremely light-hearted, filled primarily with playful banter much like that exhibited on the stage. Dorn said pranks were few and far between. "We were too busy laughing and just having a great time," he said.

"As a psychologist — I played one on TV for 7 years, so I became one by osmosis — you only play pranks on people you don't like very much," Sirtis said. "You don't do it to people you adore because you embarrass and humiliate them."

"Well, I'm from Ohio, and we are pranksters," McFadden said. She described a prank she played on Patrick Stewart after his character returned from being a member of the Borg for a while.

"We decided it might be very funny to redecorate the bridge for when he came back," she said. With the first rehearsal early on a Monday morning, she said she had the prop department put out a photo of bridge member Wesley Crusher and sent in a bunch of topless male actors, while she dressed in a bathrobe and curlers, holding a bottle of Champagne.

But everything didn't quite work out as planned.

"I had forgotten that Patrick is extremely nearsighted," McFadden said. "He couldn't take the whole thing in."

It wasn't all laughter behind the scenes. "Next Generation" actors wore tight, form-fitting uniforms that Sirtis said became a problem for her early on.

"I got the call early in the first season," she said. "'The good news is, your work is fabulous. The bad news is, you look fat.' They said, 'We pay you a lot of money to look good,' and then hung up."

According to Sirtis, both she and co-star Jonathan Frakes frequently received similar calls.

"I was the size I am now when I started," she said. "By the time I finished, I was like a matchbook."

Dorn said battling weight was a constant problem for him, as well. "I always fought with a weight problem." While life as a struggling actor didn't give many opportunities to overeat, life as a successful one meant going out for "beautiful dinners and drinks," he said. His weight was mostly controlled by managing what he ate, he said. He encouraged the audience to try veganism, which he credited with helping him make good dietary choices. "It really is life-changing," he said.

Spiner is a vegetarian, which he said also helped him make good food choices. "I used to get calls from the front office, 'Great job on scene yesterday and, man, you look fantastic," he said in a teasing tone of voice.

Rolling her eyes, Sirtis said, "I will strike him out of the panel." [Happy 50th 'Star Trek'! NASA & Friends Send Space-Age Twitter Messages]

Another fan expressed how meaningful it was for her to see a future where different types of people, especially women, work alongside male colleagues, then asked the panel if they had any "good stories."

"There are no good stories about that, even now, which is why I admire so much the younger actresses coming through" Sirtis said. She lauded fellow actresses Jennifer Lawrence, Amy Adams and Emma Stone for their courage in standing up for themselves regarding equal pay.

The entire process is a Catch-22, because "when you're starting out, that's when all the bad stuff happens," Sirtis said. "They're not going to sexually harass you when you're a star." She didn't go into details, but said she struggled early in her career. "I knew if I made trouble, I would never work again; I'd be blackballed."

McFadden said that she did address the issue early in her career and wound up fired over it, though she didn't specify if she was fired from "The Next Generation" or another show.

"I complained about what I felt was the sexist portrayal of women in some of the ['Star Trek: The Next Generation'] episodes, and got into pretty big trouble for it," McFadden said.

"What you have to understand is that, although the show is set in the 24th century, it was written by 20th century men," Sirtis said.

But she remains optimistic. "Things are changing — they haven't changed yet, but they're changing," she said. "It's because of the young women. I bow down to them." [Beam Me Up! An Astronaut's Take on 'Star Trek']

As they've met fans around the world, the actors received their share of strange questions.

"One lady stood up and said, Mr. Dorn, how does it feel to be beamed," Dorn said. "I really didn't know how to answer it."

One fan asked Sirtis why all the alien guest stars were so humanoid in shape. "I said, well, honey, when we start auditioning actors who aren't humanoid in shape, that will change," she said.

Another man asked McFadden, "Where do they park the ship when they're not flying? It's just so big." She tried three times to explain that the show was shot in a film studio, but the fan didn't seem to follow. Finally, she gave up. "He believed it so much that I didn't want to ruin it at that point," she said.

At another convention, a man approached Spiner. "He said, 'I've got a surprise for you,' and removed his shirt. On his back was my face in intricate detail. It looked more like me than I did!"

He clarified that the tattoo was of Data rather than of Spiner himself.

"I said, you will never regret that," he said and laughed. "When I'm very, very old, if I can't remember what I look like, I'm coming to you."

Not all fan experiences were pleasant. Several years ago, a husband and wife approached her. The man had drawn "a ton of nude shots" of McFadden, which the wife said she was OK with.

"There was Picard and me and a baby suckling at my breast," McFadden said. "They wanted me to sign some. I said, I think I'll pass on that."

Another fan approached Sirtis and asked, "Why did they make you so ugly on NCIS?"

"So I punched him," she said matter-of-factly. "And then I yelled at him for like 10 minutes, and he shrank before my eyes."

If the audience hadn't realized by then the differences between the outspoken, emotional actress and her calmer character, she repeated it. "You know what Troi's like? Marina's the opposite of Troi," she said.