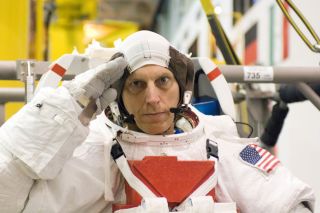 Astronaut Clayton Anderson, Expedition 15 flight engineer, salutes as he dons a training version of the Extravehicular Mobility Unit (EMU) space suit prior to being submerged in the waters of the Neutral Buoyancy Laboratory (NBL) near the Johnson Space Center.
(Image: © NASA.)

When NASA'sshuttle Atlantis launches towards the International Space Station (ISS)Friday, the 100-ton rocket ship will ferry the high-flying laboratory's next U.S. crewmember into orbit.

Riding upto the ISS with Atlantis' STS-117 crew will be NASAspaceflyer Clayton Anderson, a late addition to the mission who will replaceAmerican astronaut Sunita Williams as part of the orbital laboratory'sthree-person Expedition 15 team.

"Atfirst, you know, my expedition was relatively short," Anderson, 48, told SPACE.com,adding that he initially planned to be aboard the ISS from late June toSeptember. "Now it's more, I would say, normal or more expected. So that'spretty cool that I'm going to do a truly long-duration mission."

NASAmission managers plucked Anderson from the later STS-118 mission and added himto the STS-117 crew in late April in order to ensure a prompt Earth return forWilliams after hail damage to the orbiter's fuel tank delayedAtlantis' launch. Williams has lived aboard the ISS since December 2006,and faced a possible nine-month mission -- rather than the traditionalsix-month ISS flight -- if she did not return aboard Atlantis, Anderson said.

"Itold her that I was her knight in shining armor come to rescue her from thethroes of the space station," Anderson said with a laugh as he describedhis talks with Williams.

DuringExpedition 15, Anderson will serve as a flight engineer and NASA scienceofficer, and looks forward to a series of spacewalks and ISS construction tasksduring his flight. But he hopes to lend a hand to Atlantis' shuttle crew too.

"Theyare six men who are totally trained for their mission without me," Anderson said of the STS-117 astronauts. "Now they've added me so I can become, I hope,a utility infielder, and help them out wherever I'm needed."

Atlantis'STS-117 mission is slated to launch June 8 to deliver two new starboard solararrays and massive pieces of framework to the ISS.

A native ofAshland, Nebraska, Anderson has spent more than two decades working at NASA'sJohnson Space Center (JSC) in Houston, where he started as a summer intern in1981. So his interest in reaching space personally comes as no surprise.

"Ihave a little argument with my mom back in Nebraska," Anderson said in aNASA interview. "She says I was ready to be an astronaut at age 4 when shedressed me up in tinfoil and I got second place in the local parade duringJuly. She said I was robbed -- I should've gotten first."

But for Anderson, it was watching the crew of NASA's Apollo8 mission swing behind the Moon on television in 1968 that solidifiedspaceflight as a goal.

"[T]heneatest thing was how scared I was when they went behind the Moon," Anderson said. "[T]hen when they came back around on the other side and I finallyheard that Quindar tone, the little beep everybody hears on TV?and I heard themstart to talk again, it just gave me this really chilled feeling inside. And Ithought, wow, that is the coolest thing!"

Anderson joined NASA's astronaut ranks in1998, where he has trained for a long-duration spaceflight from the start. Heserved as a crew support astronaut for the station's Expedition 4 mission, andlater as a backup crewmember for Expeditions 12, 13 and 14 for the orbitallaboratory.

Anderson's shuttle flight switch meant somelate training for the ISS-bound astronaut, as well as some schedule scramblingfor his family and friends who had already planned to attend the STS-118 launchin August. But his wife Susan is well-acquainted with such changes, he said.

"Sueis very adapted," said Anderson of his wife. "She worked in the shuttle-Mirstation program and she is very familiar with launch slips and delays, andthe requisite risk that goes with all this so she'll be able to deal with itpretty well."

With hisearlier launch, Anderson now expects to spend about four months in space beforereturning to Earth in late October aboard a NASA shuttle during the STS-120mission. But while he does get an extra few months in space, it comes with thedrawback of more time apart from his family.

"But Ido know that the sacrifice will be worth it," Anderson said in a preflightbriefing. "Anybody that's done something similar to this understands that,when the times are really, really tough, if you can keep looking ahead to whatthe ultimate goal is, then as you look back on everything it really doesn'tseem quite so bad."

Anderson has kept a meticulous log of hisspaceflight training to share with his two children, son Cole and daughterSutton Marie, along with his extended NASA family as a sort of thank you foryears of support, he said.

"Theneatest thing for me is the fact that everyone that's here that I know andworked with and played with and interacted with during all those 20-some yearsto this point can all share in this journey because they're a part of me," Anderson said. "All those people will fly with me and I think that isprobably one of the most rewarding aspects of this mission."