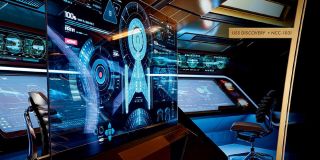 "Star Trek Discovery" debuts on the streaming service CBS All Access on Sunday (Sept. 24) at 8:30 p.m. EDT. This first episode will also air on the CBS TV channel.
(Image: © CBS)

After a 12-year gap between television series, "Star Trek" is finally coming back to a network television service. The new iteration of the acclaimed science fiction series, called "Star Trek Discovery," will debut on the streaming service CBS All Access on Sunday (Sept. 24) at 8:30 p.m. EDT. This first episode will also air on the CBS TV channel.

The show is set 10 years before the events of "The Original Series," or TOS (which ran between 1966 and 1968) and follows the crew of the USS Discovery. The crew "discovers new worlds and life-forms as one Starfleet officer learns to understand all things alien," according to the show's IMDB page.

"Discovery" will have an intimidating job: to satisfy the three generations of "Star Trek" fans who all have their own favorite versions of the franchise, which warped past its 51st anniversary on Sept. 8. "Star Trek" has seen five live-action television shows, an animated series, more than a dozen Hollywood movies (including a rebooted version with characters from TOS) and countless fan productions in the past five decades. And that's not even including the conventions and fan sites, such as the venerable "Memory Alpha" wiki that keeps track of all things "Star Trek." [The Best "Star Trek" Episodes Ever]

"'Star Trek' fans tend to be very well-informed, very passionate, and I think one of the things to remember about any fandom is part of the fun is the arguing about it," said Margaret Weitekamp, a curator at the Smithsonian Air and Space Museum in Washington, D.C.

"I think that one of the amazing things about 'Star Trek' is the coherence of its universe and being able to have one set of characters and cultures and planets and ships that is consistent and maintained both by the producers of the shows, but also by the fans," she told Space.com. "That's why I find 'Star Trek' to be such a fascinating historical topic. It's been called a 'megatext.' All those pieces fit together into one big thing that you can really look at as a scholar, and I think that in itself is a cultural phenomenon worthy of looking at with a critical eye."

When "Star Trek: Enterprise" was canceled in 2005, TV was very different than today. Most consumers still had cable subscriptions. Netflix was offering streaming back then, but the business was just really getting started. Also, social media as we know it was just beginning. Facebook was a year old. YouTube was an infant. Neither Twitter (founded in 2006) nor Snapchat (founded in 2011) even existed.

"Star Trek Discovery" will be the first "Trek" series to air as the digital age is at warp speed. Instead of competing with 1,000 cable channels, "Discovery" will fly boldly against a universe of streaming options. But such a first is nothing new for the franchise, according to Weitekamp: "Star Trek" has always been used as a pioneer for television options.

The format of the show, which attracts a smaller but dedicated audience, flopped on network television but thrived in the cable era, she said. "Star Trek Voyager" (1995-2001) was used as a catalyst for consumers to expand their cable packages, since it wasn't offered on one of the default channels.

"Discovery" will run on a relatively new platform for CBS, the All Access streaming service, which only debuted in 2014. However, customers also have access to the other "Star Trek" series when they purchase a subscription, giving more reasons to watch the show. Weitekamp added that the new series is sure to cause a buzz among fans on social media, although she wasn't sure if the creators would take social media feedback into account while evolving "Discovery." [The Best Ships on "Star Trek"]

Naming all the real-life influences of "Star Trek" is an intimidating task in itself. The show's flip-style communicators reportedly inspired some of the first cell phones. A version of the tricorder — a medical device on the show — recently became real, thanks to an XPRIZE competition.

There was even a real space shuttle named Enterprise, which got the name only after fans of "Star Trek" staged a letter-writing campaign in the 1970s to rename the glider from its more staid original moniker, Constitution. When the space shuttle made its big public debut on Sept. 17, 1976, most of the TOS cast came in person to celebrate. [13 Things 'Star Trek' Gets Right (and Wrong) About Space Tech]

Even Weitekamp's career was pulled into Trek's gravitational field. She grew up watching reruns of TOS, as well as "The Next Generation" (1987-1994), and eventually made "Star Trek" into a career. As a graduate student, she created a first-year writing course at Cornell University exploring the history of science fiction and space exploration, a course she taught again when she became a women's studies professor at Hobart and William Smith Colleges in Geneva, New York.

After joining the Smithsonian as a curator, Weitekamp took responsibility for the Enterprise model that the museum possessed — an 11-foot (3.4 meters) set model used in TOS. She vowed to take good care of it so that fans could continue to look at it. Back in 2004, the model was housed in a glass case near the basement gift shop; today, the newly restored starship has a place of honor near the back entrance of the museum, having moved there in 2016 after years of restoration.

"In many ways, Enterprise is one of the stars of the show," Weitekamp said, adding that fans are excited to see the model no matter what version of the show they remember. "People come in and are excited to see it in person, because it's what they remember from watching on television … it's a nice chance to talk a little bit about the broader cultural impact of 'Star Trek,' and a bit about the art and technology of what it took to bring those images on the screen in the late 1960s."

Weitekamp added that she can't wait to watch "Discovery." "I think it'll be a lot of fun to see a new generation of creative people taking on this long legacy of what is the 'Star Trek' canon, and seeing what kind of new storytelling we can do with it."