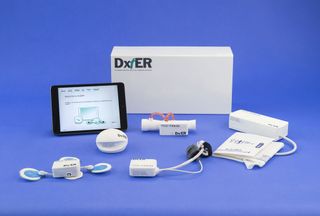 A tricorder may soon be an essential part of every voyaging astronaut's tool kit, and not just on "Star Trek."

Handheld diagnostic devices akin to the tricorders famously wielded by doctors in the "Star Trek" universe are poised to find their way into people's homes, emergency rooms, refugee camps, battlefield hospitals and perhaps even the final frontier, developers of the gear say.

"All of this is all going to be possible in a short period of time," Philip Charron, a member of the Final Frontier Medical Devices (FFMD) team that developed a prototype tricorder, said Monday (July 31) at the 69th AACC Annual Scientific Meeting & Clinical Lab Expo in San Diego. [13 Things 'Star Trek' Got Right Wrong) About Space Tech]

"It would be amazing if the tricorder actually made it back out into space again," he added, specifically citing NASA's stated goal of putting boots on Mars. "That would be a great application for something like this."

In April, FFMD took home first place (and $2.6 million) in the Qualcomm Tricorder X Prize competition. Teams that entered the contest set out to create an easy-to-use, lightweight (less than 5 lbs., or 2.3 kilograms) device that would allow laypeople to monitor their vital signs and diagnose a variety of common health conditions.

This decision entailed building out artificial intelligence based on the standard, noninvasive ER diagnostic method, Charron said; taking samples of blood, urine or other substances would be done only if absolutely necessary.

"From a 'Star Trek' perspective, this is less like Dr. McCoy, who was in the original 'Star Trek' series, and more like the doctor from 'Star Trek: Voyager,'" Charron said. (The nameless doctor on "Voyager" is a hologram, said Charron, who described himself and other FFMD team members as "'Star Trek' nerds.")

"Developed to monitor astronaut health on the International Space Station (ISS) and during long-term spaceflight, terrestrial applications for this groundbreaking technology include point-of-care (POC) diagnostics at a patient's bedside, in a doctor's office or hospital," NASA officials wrote in an rHEALTH fact sheet.