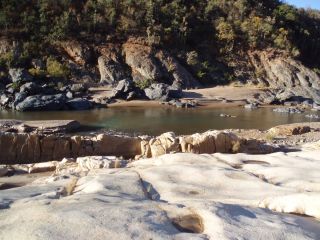 The grinding of giant chunks of Earth's outer layer — responsible for burping volcanoes, crushing temblors and burgeoning mountains, among other things — may have started half a billion years earlier than previously believed.

Precisely what Earth looked like before plate tectonics, which drive these chunks of crust around, bumping and grinding into one another, is an open question. During the Archean eon 4 billion to 2.5 billion years ago, there was water and rock on Earth, but little oxygen in the atmosphere. Simple life arose in this era, possibly around hydrothermal vents, though no one knows exactly when. The earliest chemical traces that could be evidence of life date back to just before 4 billion years ago. More widely accepted as evidence of early life are fossils in Australia of microbial mats, called stromatolites, which date back 3.5 billion years.

Whatever the Earth looked like before plate tectonics, these powerful forces define the world as it is today. The diving and crashing of tectonic plates not only created the continents we know and live upon today, it also recycles minerals and nutrients through  Earth's system. One 2014 study in the journal Proceedings of the National Academy of Sciences, for example, argued that the formation of continents on early Earth brought phosphorous to the surface, feeding microbes that then oxygenated the atmosphere. [What Was the First Life on Earth?]

"This is far from a settled issue," said Roberta Rudnick, a geochemist at the University of Santa Barbara, who was not involved in the current study but who has done research on the origin of continents.

Part of the problem, said study leader Nicolas Greber, a research associate at the University of Geneva in Switzerland, is that there just aren't that many rocks left on Earth that date back billions of years to when the planet had just formed. Of those rocks that are that old, most have been altered by weathering and chemical processes over the eons. [Photos: The Six Most Famous Rocks on Earth]

To try to tease out the origins of the crust, geoscientists typically turn to shales, which are fine-grained sedimentary rocks. Because these are rocks made of the eroded remains of earlier rocks, they should capture a well-mixed representation of those earlier rocks.

Today, Earth's crust comes in two flavors. Oceanic crust is mafic, made of dark, iron-and-magnesium-rich rocks like basalt that come directly from the melting of Earth's mantle (the layer just beneath the crust). Continental crust is felsic, made of lighter- colored rocks rich in silicon and aluminum, Greber told Live Science. One example is granite, he said. Felsic rocks form from the melting of mafic rocks. [In Photos: Ocean Hidden Beneath Earth's Surface]

Early Earth would have sported a mafic crust, Rudnick told Live Science. It's an open question when felsic rocks first started forming. Figuring out when felsic continental crust formed would mean identifying a start date for plate tectonics. That's because subduction zones — places where tectonic plates crash into each other and oceanic crust slides beneath the continental crust — serve as the primary factories for felsic rocks. Subduction zones bring water down into the crust, which lowers the melting point of rock by disrupting the bonds in the minerals within the rock. This leads to the formation of the felsic rocks that make up continents, Rudnick said.

Previous work used the ratios of various minerals in shales to try to determine when the continents became felsic, and many of those studies put the timing at around 3 billion years ago. But those measurements were vulnerable to all the changes that 3.5 billion-year-old rocks have been through while on Earth, Greber said. Certain minerals might weather out more readily than others, for example, leaving a skewed record behind.

Greber and his colleagues tried a different approach. They studied shales for their ratios of particular isotopes of titanium. Titanium is insoluble and doesn't get washed away during weathering. It's biologically inert and not affected by atmospheric processes, the researchers wrote in their new study, published today (Sept. 21) in the journal Science.

"It's such a beautiful tight correlation," Rudnick said. "It's really quite spectacular."

Greber, who did most of the research while at the University of Chicago, tested 48 shales and 30 composite shale samples from various locations around the world. The rocks came from well-studied collections, Greber said. The oldest dated to 3.5 billion years ago.

Throughout that time span, Greber and his colleagues found, the average titanium ratio remained remarkably constant. That finding suggests that felsic rocks were a major component of continental crust for at least 3.5 billion years, Greber said. If so, the most likely explanation is that plate tectonics and subduction zones were already present for at least that long. [In Images: How the North American Continent Grew]

There are questions left to answer, Rudnick said. While the average titanium ratio was fairly constant, there's a lot of scattering in the data, she said, meaning there were pretty big swings between felsic and mafic between individual shale samples. Greber and his team think that's just a side effect of the geographical location where each shale was found, with some being a bit more basalt-rich, and others more granite-rich. But the scatter still seems odd, Rudnick said. Shales are supposed to be a homogenous mix of the continental crust, so there shouldn't be that much variation between them.

Future research should try to get to the bottom of the scatter, Rudnick said. One key experiment, she said, would be to test titanium isotopes directly for weathering to be sure that they really aren't strongly affected.

"I think this is a very interesting and very provocative paper, and that it will spur lots of further investigations," she said, "which is always what you want."