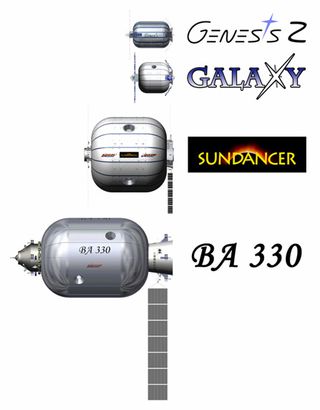 This layout released by the Las Vegas, Nevada-based Bigelow Aerospace shows the size relations between the firm's various planned inflatable spacecraft. At top is Genesis 2, a near-identical follow on to the Genesis 1 module, set to fly in late June 2007.
(Image: © Bigelow Aerospace.)

The launchof a second private space station prototype has been delayed until late nextmonth to allow additional tests of its Dnepr booster rocket.

Genesis 2,an inflatable module built by the Las Vegas, Nevada-based firm Bigelow Aerospace,will fly four weeks later than planned due to the extra checks, said RobertBigelow, the firm?s founder, in a statement released Thursday. The module waspreviously targeted for a late May launch from Russia?s Yasny Launch Base inSiberia.

"Wenow expect the launch of Genesis 2 to occur in late June,? Bigelow wrote.

?The pathto space has never been and will never be simple of easy,? Bigelow said in hisstatement.

The liftoffof Genesis 2 has encountered a series of delays, the latest of which can betraced back to the July 2006failure of a Dnepr rocket that prompting the booster?s joint Russian-Ukrainianlaunch provider ISC Kosmotras to postpone space shots until a successfulApril 17 launch.

?[W]eexperienced similar delays on the Genesis 1 campaign and, of course, were quitepleased with the end result,? Bigelow stated. ?Moreover, since Genesis 2contains a variety of important mementos, photos and other personal items aspart of our ?Fly Your Stuff? program, both Kosmotras and Bigelow Aerospace areproceeding with great caution in order to safely and successfully deliver thespacecraft to orbit.?

Like Genesis1, Genesis 2 is powered by a series of solar panels designed to deploy in Earthorbit. The new spacecraft is identical in size to its predecessor and is about15 feet (4.4 meters) long. Its diameter is designed to expand from an initial6.2 feet (1.9 meters) to about eight feet (2.54 meters) when fully inflated.

The moduleis a one-third scale version of future manned orbital modules planned forlaunch by Bigelow Aerospace, the firm has said.

BigelowAerospace officials plan to launch a new inflatable module, dubbed Galaxy, in 2008.The human-habitableSundancer vehicle could follow in 2010 as a predecessor to the larger BA330 module, the Las Vegas-based firm has said.