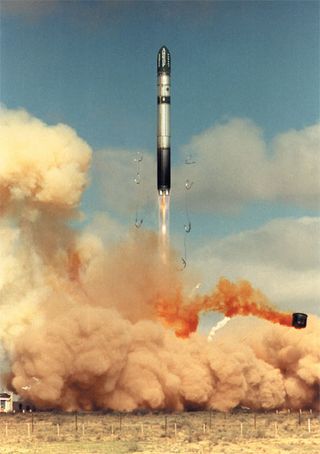 A Dnepr rocket, similar to that shown here in this archive launch image, failed to reach orbit on July 26, 2006, resulting in the apparent loss of several small satellites.
(Image: © ISC Kosmotras.)

A civilianDnepr rocket built from a modified intercontinental ballistic missile failed tocarry a clutch of small satellites into orbit Wednesday as it crashed justsouth of its Central Asian launch site, according to Russian wire reports.

"The firststage failed to separate on time, it stopped working about 10 minutes earlier,and that is why the engine shut down in emergency mode," Yury Nosenko, deputyhead of Russia's Federal Space Agency, told Interfax.

Aninvestigation is underway to determine the root cause of the booster's failure.

"A specialcommission has been set up to investigate into the circumstances of the crash,"Nosenko told Interfax, adding that the Dnepr rocket crashed about 15.5miles (25 kilometers) south of its launch site. "No damages were caused topopulated localities on nearby territories."

Dneprrocket launches are managed by ISC Kosmotras, a joint effort between the Russianand Ukrainian governments. The boosters are based on converted SS-18intercontinental missiles and carry three stages to reach orbit.

Each Dneprbooster stands about 111 feet (34 meters) tall and carries a diameter of about 10feet (three meters).

Accordingto one mission description, the CubeSats were destined for an orbit between 310and 372 miles (500-600 kilometers) above Earth.

A follow upmission - Genesis-2 - was slated to fly in late 2006 or early 2007, but may bedelayed as investigators target the source of today's Dnepr launch failure.

Russia'sInterfax NewsAgency contributed to this report.