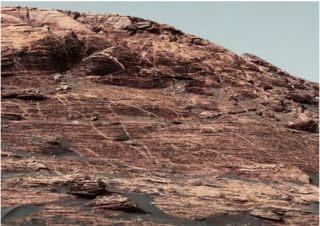 Researchers used the Mastcam on NASA's Curiosity Mars rover to gain this detailed view of layers in "Vera Rubin Ridge" from just below the ridge.
(Image: © NASA/JPL-Caltech/MSSS)

NASA's Mars rover Curiosity is chugging up a steep red-rock slope that wouldn't look out of place in the canyon country of the American Southwest.

Curiosity began climbing Vera Rubin Ridge in early September, NASA officials said. The rover's handlers want Curiosity to study the ridge's many layers all the way to the top — an ascent that will cover 213 vertical feet (65 meters), and about 1,870 feet (570 m) of driving distance.

For perspective: Since landing inside Mars' huge Gale Crater in August 2012, the car-size rover has gained about 980 feet (300 m) in elevation and put 10.76 miles (17.32 kilometers) on its odometer, NASA officials said. [The 10 Biggest Moments from Curiosity's First 5 Years on Mars]

"Now we'll have a chance to examine the layers up close as the rover climbs," Curiosity science-team member Abigail Fraeman, of NASA's Jet Propulsion Laboratory in Pasadena, California, said in a statement.

Vera Rubin Ridge is also known as "Hematite Ridge," because it's rich in that iron-oxide mineral, especially in its upper reaches.

Mission scientists hope Curiosity's climb helps reveal, among other things, why the ridge resists erosion so much better than the rock that used to surround it, and how its hematite got so concentrated.

"The team is excited to be exploring Vera Rubin Ridge, as this hematite ridge has been a go-to target for Curiosity ever since Gale Crater was selected as the landing site," Michael Meyer, lead scientist of NASA's Mars Exploration Program at agency headquarters in Washington, D.C., said in the same statement.

The chief goal of Curiosity's $2.5 billion mission is to determine if Gale Crater could ever have supported microbial life. The rover's observations near its landing site quickly answered that question in the affirmative, and further work showed that Gale hosted a potentially habitable lake-and-stream system in the ancient past for long stretches — perhaps hundreds of millions of years at a time.

Curiosity reached the base of Mount Sharp in 2014. The mountain has long been Curiosity's ultimate destination; mission scientists want the rover to climb through the foothills, reading a history of Mars' changing environmental conditions in the rock as it goes.

The Vera Rubin Ridge campaign is part of this larger objective.