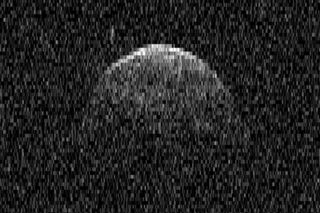 The huge asteroid that cruised past Earth last week in a record-breaking flyby has two moons, radar images reveal.

On Sept. 1, the 2.8-mile-wide (4.5 kilometers) near-Earth asteroid 3122 Florence zoomed within 4.4 million miles (7 million km) of our planet — a mere 18 times the distance from Earth to the moon. No other space rock that big has come so close since NASA began tracking asteroids in earnest, agency officials have said.

The flyby therefore presented a rare scientific opportunity, and astronomers around the world trained a number of instruments on Florence as it approached. One such facility was NASA's Goldstone Deep Space Communications Complex in California, which captured some dramatic and informative views. [Famous Asteroid Rock Flybys and Close Calls (Infographic)]

For example, imagery obtained by the 230-foot (70 m) dish at Goldstone confirmed Florence's size and its 2.4-hour rotation period, values that scientists had already figured out thanks to previous observations. And Goldstone revealed that the asteroid is roughly spherical, with an equatorial ridge and at least one big crater, NASA researchers said.

Florence's shape was a mystery before last week's flyby. Also unknown was whether the space rock had any moons, but Goldstone's imagery revealed two.

"The sizes of the two moons are not yet well-known, but they are probably between 100-300 meters (300-1,000 feet) across," researchers Lance Benner, Shantanu Naidu, Marina Brozovic and Paul Chodas, of the Center for NEO (Near-Earth Object) Studies at NASA's Jet Propulsion Laboratory in Pasadena, California, wrote in a Sept. 1 update.

"The times required for each moon to revolve around Florence are also not yet known precisely, but appear to be roughly 8 hours for the inner moon and 22 to 27 hours for the outer moon," the researchers added. "The inner moon of the Florence system has the shortest orbital period of any of the moons of the 60 near-Earth asteroids known to have moons. In the Goldstone radar images, which have a resolution of 75 m [250 feet], the moons are only a few pixels in extent and do not reveal any detail."

Florence is just the third "triple asteroid" known out of more than 16,400 rocks that have been discovered and tracked in near-Earth space. The last time two moons were spotted around one asteroid was in 2009, Benner and his colleagues wrote.

The scientists stitched some of the Goldstone images together, creating a movie that shows Florence completing more than two rotations, with the two moons seen moving around the huge space rock.

Additional radar views may reveal yet more detail; researchers aim to keep studying Florence using Goldstone and the Arecibo Observatory in Puerto Rico through Sept. 8, the NASA researchers said. But Hurricane Irma apparently thwarted part of this plan; Arecibo has ceased operations and will not resume them until the storm has moved on, observatory representatives announced Tuesday (Sept. 5).

There was never any risk that Florence would hit Earth during Friday's flyby, and the asteroid doesn't pose a threat to the planet for the foreseeable future, NASA officials have stressed.