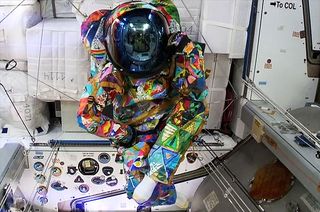 An astronaut models "Unity," a spacesuit painted by children with cancer, on the International Space Station.
(Image: © Spacesuit Art Project via collectSPACE.com)

HOUSTON — The crew on board the International Space Station (ISS) helped raise awareness for pediatric cancer on Wednesday (Aug. 23) with the on-orbit debut of a hand-painted spacesuit inspired by the cooperation between the orbiting laboratory's partner nations.

Expedition 52 flight engineer Jack Fischer donned "Unity," a patchwork costume spacesuit decorated by children with cancer in the U.S., Russia, Germany, Japan, and Canada — the same countries that operate the space station. The multicolor garment, a product of the Spacesuit Art Project, was pieced together by ILC Dover, the same company that furnishes the softgoods for NASA's real spacesuits.

"It is tricky to get into, but it is worth it, kind of like the real suit," said Fischer during a live downlink with the project's organizers and some of the children who contributed to the design. "The real suit, you have the reward of getting to go outside and seeing an amazing view. [With] this suit, you have the reward of the opportunity — or rather the honor, to represent the bravest kids in the world who actually put it together." [Evolution of the Spacesuit in Pictures (Space Tech Gallery)]

"And, you know, it makes a nice fashion statement. A little nod to my eclectic style," he added with a smile.

Fischer, whose daughter, Bethany, is a teenage survivor of papillary thyroid cancer, said that the suit was the "coolest thing" he had seen in space, replying to a question by one of the children at NASA's Mission Control in Houston.

Unity is the third outfit to be produced by the Spacesuit Art Project, which was founded in 2015 by the Johnson Space Center Engineering Directorate, ILC Dover and by children in hospitals around the world. The first and second suits, named "Hope" and "Courage," were made by the pediatric patients at MD Anderson Cancer Center in Houston.

In 2016, NASA astronaut Kate Rubins wore Courage while in orbit.

"We were overwhelmed by the very positive reaction and excitement about Courage on ISS," Nicole Stott, a former astronaut-turned-artist and co-founder of the Spacesuit Art Project, said. "At all levels, it was such a beautiful thing."

"As an international work of art, we know Unity will bring an even broader and more powerful positive reaction," she added. "The global cooperation we experience every day with our ISS program is such the perfect example for how we can successfully do so many other complex things — it was also the perfect example for painting and building an international spacesuit of art and getting it to space."

"Every kid [who] painted this suit and every kid [who] they represent are real heroes," NASA astronaut Randy Bresnik said from orbit. "As excited as we are about seeing human beings make history by stepping on another planet, all of us would much rather see us make cancer history before that happens."

In addition to raising awareness about pediatric cancer, the astronauts are also using the microgravity environment on board the space station to conduct research into possible treatments and cures.

"We are trying a new method that scientists on the ground developed and testing it out up here, where antibodies that recognize the cancer cells have a drug attached to them and they go out and try to specifically kill the cancer cells, which would be particularly helpful in chemotherapies on the ground," said astronaut Peggy Whitson, referencing an investigation focused on lung cancer cells.

Wednesday's event on the space station was followed by children cancer patients gathering in several locations on Earth to paint fabric swatches for the next spacesuit.

"We have the 'Exploration' spacesuit that is being painted in coordination with this event today by children all around the world," Stott told the crew in orbit. "We're really hoping that this project will help us facilitate more art in medicine programs around the world and [sending] pediatric cancer research to the space station."