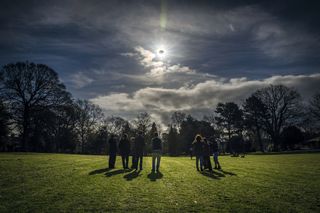 A solar eclipse makes a striking impression on the sky for those in its path — but how and when does it happen?
(Image: © Robin Cordiner)

As we are now less than a week away from "The Great American Eclipse" on Aug. 21, there will be countless articles appearing in newspapers, magazines and online talking about what causes a solar eclipse. I can remember as a young boy, not quite 7 years of age, having my grandfather explain the mechanics of what causes an eclipse using a salt shaker (for the moon), a pepper shaker (for Earth) and his fist for the sun.

By lining them up and placing the salt shaker between the pepper shaker and his fist, my grandfather explained that when such a lineup occurs in space, the moon will "get in the sun's way" and block out some or all of it, producing an eclipse of the sun.

Of course, there is a lot more to it than this. Just when, for example, do these alignments take place? [Total Solar Eclipse 2017: When, Where and How to See It (Safely)]

If the moon orbited Earth in the same orbital plane in which Earth orbits the sun, an eclipse of the sun and an eclipse of the moon would each happen every month. But the moon's orbit is tilted slightly relative to that of Earth: by 5.15 degrees. As a result, at new moon phase, from our earthly vantage point, the moon usually appears to pass either above or below the sun in our sky and the moon's shadow misses Earth.

Notice that the dates are not distributed randomly throughout the year, but are grouped at approximately half-year intervals. We cannot, for example, have an eclipse in September and another in December. For 2017, these "eclipse seasons" are in February and August.

In our sky, there is an imaginary line that we call the ecliptic. That is the line that marks Earth's orbital path around the sun. The sun always remains on that ecliptic line, while the moon wanders above and below the ecliptic as a result of its orbital inclination. When the moon crosses the ecliptic — that is, when it reaches that point in its orbit where it passes through Earth's orbital plane — we call that point a "node." An eclipse can only occur when a new or full moon is near a node. On Aug. 21, the moon is new only about 8 hours after arriving at its ascending node, and the alignment of the moon and sun is good enough for a total eclipse. When we speak of an "ascending" node, that is the point where the moon crosses the ecliptic going from south to north. On Monday, that particular point will be in the constellation Leo, while the descending node is in Capricornus.

Now, go back and look at the table again. Note that the eclipse seasons occur a few weeks earlier each year. This is because the nodes are not stationary points at all. They move slowly westward, or "regress," along the ecliptic while the moon's inclination remains almost unchanged. This regression of the moon's nodes takes 18.6 years for one complete circuit; a complete nodal cycle. If, on the other hand, the orientation of the moon's orbit were fixed, then the eclipse seasons would come at the same time every year. [Science-Savvy Grandparents Explain Solar Eclipse in New Children's Book]

Earth versus sun: Moon caught in the middle

We can thank the gravitational tug-of-war between Earth and the sun for the changes wrought on the moon's orbital motion. Earth, of course, has greater influence on the moon because it is much closer to it than the sun. However, the sun still manages to perturb the lunar orbit in many other ways.

Along with the continual turning of the moon's orbital plane, even when the moon passes squarely across the face of the sun, the eclipse in question might not necessarily be total but annular; because the moon travels around the Earth in an elliptical orbit, it sometimes can be too far away from Earth for its dark umbral shadow to touch down on Earth's surface. The result? An annulus, or ring of sunlight that remains in view around the moon's silhouette. The major axis of the ellipse (the technical term is the line of the apsides) is also perturbed by the sun, and rotates eastward in the orbit plane in 8.85 years. Each month the dates of apogee (the moon's farthest point from Earth) and perigee (its closest point) occur a few days earlier relative to the dates of the moon's phases.

And just as the moon orbits Earth in an elliptical orbit, so does Earth similarly orbit the sun. We get as close as 91.4 million miles in early January and pull as far away as 94.5 million miles in early July. The difference amounts to less than 3.5 percent, but the sun's gravitational attraction varies inversely as the square of the distance, in this case about 7 percent. This annual oscillation in the sun's gravitation pull causes a perturbation in the moon's orbit known as the annual equation, and causes the moon to be slightly ahead of schedule from July to January and slightly behind at other times.

The sun not only alters the orientation of the moon's orbit, however, but also its shape; a perturbation called the evection. Also, because the moon is about a half million miles closer to the sun at new moon compared to full moon, the moon runs slightly ahead between new and first-quarter phases, and again between full and last quarter, an irregularity known as the variation. [Astronauts on the Space Station Will See the Solar Eclipse 3 Times]

You might think that these ever-so-slight differences in the motion of the moon have only been recently discovered, but, believe it or not, both the annual equation and the variation were known to the great Danish astronomer Tycho Brahe around the year 1600. The invention of the telescope was still a decade or so into the future, so Tycho used naked-eye instruments. Tycho was an assiduous observer of the sky, and was able to detect minute variations in the movements of the moon and the planets. And knowledge of the evection was known some 2,000 years ago to ancient Greek astronomers such as Ptolemy and Hipparchus.

Countless other minor perturbations come from factors such as the shape of Earth and the gravitational pulls from the other planets that can cause slight changes in the motion of the moon. Is it any wonder, then, that British mathematician and astronomer Ernest W. Brown, who devoted his life to studying the motion of the moon and putting together lunar tables, once commented that the time spent taking into account all of these planetary effects was liked "playing three-dimensional chess blindfolded."

So, as you watch the moon slowly cross in front of the sun on Monday, think back to this article and consider all the things that went into the calculation of this amazing celestial event.