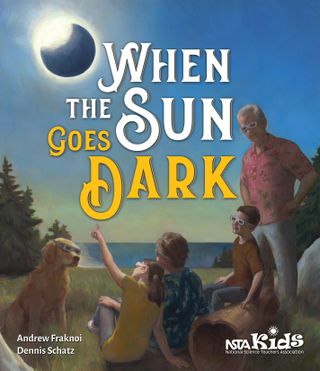 Andrew Fraknoi and Dennis Schatz have written an example-filled children's book for astronomy enthusiasts of all ages to learn and then teach others about the science behind the upcoming Aug. 21 solar eclipse.
(Image: © The National Teachers Association)

In the children's book "When the Sun Goes Dark" (NSTA Kids, 2017), 12-year-old Diana and her little brother, Sammy, meet up with their colorfully attired grandparents. When Diana asks them why they are dressed as tourists and why they are touting large cameras, they tell their story of a recent trip to view a solar eclipse. Using household items like a Hula-Hoop, the grandparents teach the kids about the science of eclipses.

The book's illustrations, by artist Eric Freeberg, accompany the tale of scientific learning written by science educators Andrew Fraknoi and Dennis Schatz. The book couldn't come at a more appropriate time: Like the grandparents in the story, millions of people are expected to travel to see the upcoming Aug. 21 total solar eclipse, whose shadow will pass across 14 states in the continental U.S.

Fraknoi has worked in several capacities to educate the public: He is the lead author of "Astronomy" (Open Stax, 2016), an introductory college textbook, and is the moderator of the Silicon Valley Astronomy Lectures at Foothill College in California, where he teaches. He has received many awards — and had an asteroid named after him by the International Astronomical Union — for his contributions to the popularization of astronomy. [Fake Solar Eclipse Glasses Are Flooding the Market: How to Stay Safe]

In an interview with Space.com, Fraknoi said that having the grandparents in the book tell the story of the total solar eclipse highlights an important reality about astronomy education today: the role of intermediaries. Fraknoi said he's learned that training intermediaries, or people who can then go on to teach other members of the public about a topic, creates a "multiplier effect," helping more people learn about the subject.

"We've spent quite a bit of time over our careers in astronomy education training intermediaries," Fraknoi said. "We've always thought about who exactly it is that does education and how we can get to [them]."

It's important to reach grandparents and other informal educators because, according to Fraknoi, they have resources available to them, such as time, to learn about the science. "When the Sun Goes Dark" offers examples of ways to explain solar eclipse science, which informal educators can then use themselves to teach family and friends, Fraknoi said.

If you are wondering about the Hula-Hoop in the book and its effectiveness as a teaching tool, Fraknoi shared that Schatz has "had fun on airplanes" when asked by fellow passengers why he is taking a colorful hoop with him on his travels (one that often doesn't fit in the overhead compartment). This allows for impromptu science-education explanations. Fraknoi has also found these demonstrations to be a helpful learning aid in college classes, and he shared that students have enjoyed them.

Schatz uses the hoops to demonstrate the relative 5-degree tilt of the moon's orbital plane compared to that of the Earth. One Hula Hoop represents the moon’s monthly path around the planet. The second hoop represents the apparent year-long path of the sun in Earth’s sky; even though it is actually the Earth that orbits the sun, from an observer’s point of view the sun is high in the sky in summer, and low in the sky in winter. In the book, the grandfather places his head at the center of these two hoops, representing the viewpoint of an observer on Earth. The places where the hoops meet – called nodes – are where the moon and the sun overlap (as seen from Earth) and create eclipses. There are two nodes, so these overlaps occur about twice a year, and during those times Earth experiences an “eclipse season.”

Fraknoi said that finding easy ways to explain the science of eclipses is fundamental to instilling an understanding of astronomy in general.

"[Schatz] has been very focused on teaching about the moon and the sun and their relationships, because it's so basic to understanding what happens in the sky." Fraknoi said. "If you want kids at an early age to be thinking about astronomy, the most accessible object in the night sky is, of course, the moon, [because] it is dramatic."

"When the Sun Goes Dark" is available on the National Science Teachers Association Store and on Amazon.com.