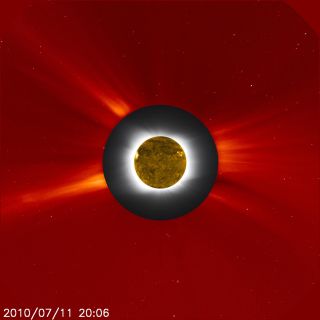 With the 2017 total solar eclipse only one month away, scientists from several science organizations highlighted how studying the sun during an eclipse will help improve understanding of the behavior of Earth's closest stellar neighbor.

The Aug. 21 eclipse's totality path will span 14 different states coast to coast, taking roughly 91 minutes to cross the country. While the location of greatest eclipse is Hopkinsville, Kentucky, the time of totality will average about 2.5 minutes across all locations.

Officials from NASA, the National Science Foundation (NSF) and the National Center for Atmospheric Research (NCAR) came together yesterday (July 21 to discuss their plans during a press conference in Boulder, Colorado. [The Best ISO-Certified Gear to See the 2017 Solar Eclipse]

"The neat thing about this — as a scientist, and is someone who has kids — is the whole lower 48 [states] will be in shadow," said Scott McIntosh, director of NCAR's High Altitude Observatory. Some states will see only partial eclipses, while others will see the sun totally disappear. The event will provide opportunities for millions of amateurs to get involved with the science alongside professional astronomers, McIntosh added. (Make sure to observe proper eye safety during the eclipse.)

Because millions of people will be rushing to the small band of totality, however, the Department of Transportation has a special website available for the best routes. That's something people should check ahead of eclipse day, said Madhulika "Lika" Guhathakurta, the NASA lead scientist for the 2017 eclipse. "Traffic is going to be a nightmare," she said.

The eclipse is also well-timed, as the science community gears up for some major science projects that will focus on the sun. The Parker Solar Plus Probe will launch in 2018 to provide an unprecedented close-up view of the sun's corona, its superhot outer atmosphere. And in 2020, the Daniel K. Inouye Solar Telescope will act like a "microscope of the sun," as the 4-meter telescope begins gathering high-resolution imagery of Earth's closest stellar neighbor.

The science of totality

Astronomers can easily create an artificial eclipse for a particular observer using a device called a coronagraph, which blocks most of the sun except for its corona, its superheated outer atmosphere. Scientists want to study this feature of the star to better understand how energy is transmitted from the sun into space.

The corona "is a fairly blustery environment," McIntosh said, pointing out that the Earth is affected by the "space weather" that the corona's changes generate. The strongest solar flares can induce outages in satellites and power lines, which is another reason NASA and other organizations are interested in learning about the connection between the sun and the Earth's environment, he said.

The moon will provide an advantage, however, over a coronagraph when the eclipse occurs, the researchers said. The moon is 400 times smaller than the sun and, coincidentally, about 400 times closer to Earth — meaning it can cover the surface of the sun perfectly if the two bodies are aligned. A coronagraph, however, needs to be a bit larger than the sun's surface to avoid damage to the telescope.

"The moon is a perfect occulter. It blocks the surface of the sun just perfectly, so you can see very low into the solar atmosphere," said Carrie Black, the NSF's associate program director in the Division of Atmospheric and Geospace Sciences.

In particular, scientists will be interested in studying the "low corona," where most of the sun's activity is generated. Black said this zone — which is also where space weather originates — is of particular interest to the federal government, which is "investing a lot of money and organizing folks" to protect communications links and the power grid from space weather event.

Additional information about the sun's behavior comes from NASA's missions across the solar system, said Guhathakurta. NASA's many orbital missions at Mars and the New Horizons mission that flew by Pluto in 2015, for instance, can provide a new perspective because they can measure how its particles have changed energy or direction as they travel further out than Earth. This provides additional information to help forecast the sun's activity, Guhathakurta said.

Incidentally, the moon's topography will also influence which regions on the Earth experience totality during the eclipse, as the moon is not a flat surface; it is full of craters and mountains that affect the shadow passing across the Earth's surface. Data from NASA's Lunar Reconnaissance Orbiter is available to help people predict where they should be standing in the United States to get the best view.

Here is a partial list of science observations going on (a full list from today's discussion is at https://www2.hao.ucar.edu/eclipse-science-showcase-attendees-experiments):

There also are crowdsourcing projects available, such as: