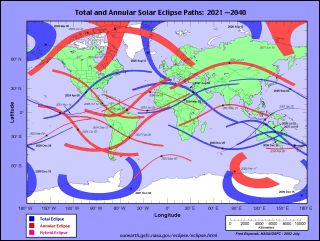 Paul Sutter is an astrophysicist at The Ohio State University and the chief scientist at COSI science center. Sutter leads science-themed tours around the world at AstroTouring.com. Sutter contributed this article to Space.com's Expert Voices: Op-Ed & Insights.

We would ideally get solar eclipses every month during the new moon, when the Earth, moon and sun form a nice, straight line. Unfortunately, however, the orbit of the moon is tilted with respect to the Earth-sun line, so we get these fantastic natural shows only every few years or so.

The next corona show to grace the United States isn't that far off, coming April 8, 2024. That one will come up from Mexico via Texas, track along the Ohio River, and exit via Lake Erie and Lake Ontario. Some folks are already dubbing that one the "Great North American Eclipse." If you live in New England, while you may have one of the worst spots for the 2017 eclipse, you have to wait only seven years for a decent view. [Total Solar Eclipse 2017: When, Where and How to See It (Safely)]

After that, we'll wait until mid-century for another cluster of eclipses, with one in 2044 barely grazing Montana and one on Aug. 12, 2045, following a similar cross-country trek as 2017's. That one will give the southern half of the U.S. a better show, however.

We then have to wait a few more decades until anything substantial occurs. The southeast will get a double dose in 2052 and 2078, and the northeast will get clipped again in 2079. Alaska gets a couple eclipses to enjoy by itself in 2033 and 2097.

The last eclipse of the century, on Sept. 14, 2099, will be a half-hearted cross-country tour, entering through North Dakota, traveling just south of the Great Lakes and exiting via the mid-Atlantic.

Here's the lesson: While there will be plenty of chances to catch a total solar eclipse in your own backyard in the coming century, a century is a very long time — at least in human terms. This year will be one of the best chances for the entire country to enjoy the show, with a large fraction of Americans within a day's drive of totality.