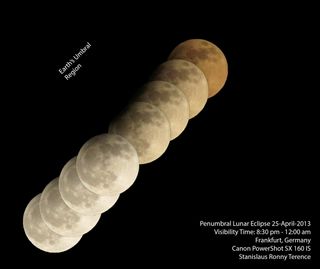 Much of the Eastern Hemisphere will be treated to a partial eclipse of the moon Monday (Aug. 7) — a prelude to the grand spectacle that awaits North Americans exactly two weeks later.

The lunar eclipse will be visible from parts of Europe, Africa, Asia and Australia, and peaks 2:20 p.m. EDT (1820 GMT). Even if you're not in the path of the partial lunar eclipse, Monday will bring a summer full moon to the night sky. Traditionally, some Native American fishing tribes were aware that sturgeon — a large fish that inhabited the Great Lakes as well as Lake Champlain — were most readily caught around the time of the August full moon, hence it became known as the Full Sturgeon Moon. A few tribes knew it as the Full Red Moon because, as the moon rises, it appears reddish through any sultry haze. It was also called the Green Corn Moon or the Grain Moon.

You can watch the partial lunar eclipse live on Slooh.com beginning at 11:45 a.m. EDT (1545 GMT). The webcast will last through 3:20 p.m. EDT (1920 GMT) and feature special guest commentators and live eclipse views from Slooh's partner observatories in Africa, Asia and Australia. You can also watch the webcast live on Space.com, courtesy of Slooh.

This upcoming full moon will also be the last one before the upcoming "Great American Eclipse" on Aug. 21 — and will itself experience a partial eclipse.  [Total Solar Eclipse 2017: When, Where and How to See It (Safely)]

Both eclipses are, of course, related. A solar eclipse can occur only when the moon is at a node of its orbit. (The nodes are the two points where the moon's path on the sky crosses the sun's apparent path through the stars, known as the ecliptic.) During the solar eclipse the moon will be crossing the ecliptic from south to north. But a half orbit earlier, at full moon, it will cross the opposite node from north to south, encountering the Earth's shadow along the way.

All this is a fine example of how an "eclipse season" works. An eclipse season is when the sun (from our perspective here on Earth) is close enough to one of the moon's nodes to allow for an eclipse to occur. During the season, which lasts a little more than a month, whenever there is a full moon a lunar eclipse will occur and whenever there is a new moon a solar eclipse will occur.

Unfortunately, the Americas are completely shutout of seeing this upcoming lunar event, since that part of the Earth will be turned away from the moon and will be in daylight when the eclipse takes place. Depending on where you are in the United States, this eclipse takes place during the late morning to early afternoon, when the moon is below the horizon.

Conversely, most of Asia, Indonesia and Australia will be facing the moon when it skims through the northern tip of the Earth's dark umbra. For these locations, the eclipse will take place chiefly during the after-midnight hours of Tuesday (Aug. 8).

For Western Europe, the moon will either rise on Monday evening with the last vestige of the umbra still visible on the moon's western limb (eastern Spain, most of France, central and southern Sweden), or it will have just moved off the moon's disk completely (western Spain, Portugal, the United Kingdom and Norway). All of these locations will see the last smudge of the penumbral shadow leave the moon around 19:45 UTC.

At maximum eclipse (18:20 UTC), umbral penetration will fall just shy of magnitude 0.25, meaning the moon's southern quarter will be submerged in the Earth's dark umbral shadow. For those who are able to view this eclipse, probably the most interesting thing to watch with binoculars or a telescope is when the umbra moves over the dazzling lunar crater Tycho, briefly plunging it into darkness between 18:07 and 18:40 UTC.

With or without a telescope, the most striking effect will come between 17:22 and 19:18 UTC: The smooth curve of the dark umbra on the lunar disk will be a nice reminder to us, as it was a divine revelation to the ancient Greeks, that our Earth is round.

Here is a timetable for the eclipse; times are given in Coordinated Universal Time/GMT, which is four hours ahead of Eastern Daylight Time.

It is interesting to note that regarding timing and region of visibility, this eclipse is the mirror image of the solar eclipse coming Aug. 21.

This lunar eclipse is relatively small and unimpressive, while the solar eclipse will be total.

North America will not see anything of the lunar eclipse, but will be in great position to see either a total solar or a large partial solar eclipse.

And the peak viewing times for both the lunar and solar eclipses occur at the same time of day for the U.S: late morning through early afternoon. Of course, as we have already pointed out, the moon will be out of sight for North America during the lunar eclipse on Aug. 7, but high in the sky for most Americans as it crosses in front of the sun's disk on Aug. 21.

Editor's note: If you snap an awesome photo of the moon or the lunar eclipse that you'd like to share with Space.com and our news partners for a potential story or gallery, send images and comments in to at spacephotos@space.com.