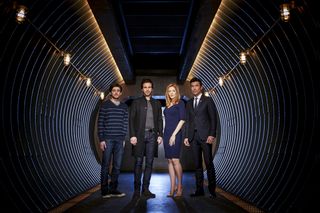 In the new TV thriller "Salvation," premiering today (July 12) on CBS, an unlikely collection of heroes — an MIT student, a public affairs officer, an eccentric billionaire and a Pentagon official — try to deflect an asteroid hurtling toward Earth.

Space.com caught up with the show's co-executive producers, Liz Kruger and Craig Shapiro, to hear about the making of the show, its most interesting scientific ideas and how it explores the geopolitics of an asteroid threat.

"Salvation" kicks off with an MIT graduate student named Liam Cole, played by Charlie Rowe, working on mapping near-Earth objects — until his simulations suggest there's an as-yet-unknown asteroid hurtling toward Earth. When he rushes to inform the authorities, it turns out they already know. And they have a very different idea for humanity's defense than billionaire entrepreneur Darius Tans (Santiago Cabrera), who begins to pursue his own solution, with Liam's help. ['Salvation' TV Clips Hint at (Fictional) Plan to Save Earth from an Asteroid]

Like the show's protagonists, who have just six months to deflect the asteroid or save a remnant of humanity, Kruger and Shapiro had only a limited time to develop the concept and write up their first script — just 12 days from when CBS brought them the concept. And then they got to work writing the series at that same whirlwind pace.

"From the first time we ever heard about the project until it was a go was about three weeks," Shapiro told Space.com. "Just totally insane."

"It allowed our imaginations to run wild," Kruger added, "because we realized that everybody knew this was such a crazy idea, to try to come up with an entire series in such a short time. It's been a wild ride since day one."

In those first three weeks, the two dove into researching existing asteroid-prevention strategies — whether exploding an asteroid with a nuke (very dangerous, as the pieces will keep coming toward Earth) or using a gravity tractor, which is a spacecraft that uses its own gravitational pull to bend the asteroid's path. The producers also looked into technologies on the edge of plausibility, like the supposed physics-violating EmDrive NASA researchers are investigating in real life.

"A big part of our — we like to call it the science-fact adventure part of the show — is watching our characters invent new technology to solve the problem," Kruger said. "It's very exciting, because we've been taking the existing technology and trying to advance it in the context of the series."

The duo consulted with astronomer Phil Plait — who writes the "Bad Astronomy" blog on Slate.com — to make sure their ideas about near-future technology not only advanced the story, but also were accurate. [How NASA's Planetary Defense Office Detects Asteroids Early]

Shapiro compared the series to Andy Weir's novel "The Martian" (2014, Broadway Books), which documents in detail the problems faced by an astronaut stranded on Mars. In that book and the 2015 movie, the character and situation draw in the audience, so they can appreciate the science, according to Shapiro.

"['Salvation'] humanizes the scientific work, because there is a lot of pressure to solve the problem," Shapiro said of the "Salvation" characters working to defend against the asteroid. "It's really thrilling to achieve this kind of breakthrough in science and see it happen on screen.

"It's like they're launching a version of the Manhattan Project in which we must solve an incredibly difficult problem in an extremely short period of time or we may all die," he added. "That's quite a motivator for people."

Besides the scientific story line, the show also follows a political one: Grace Darrow, the Pentagon's press secretary, played by Jennifer Finnigan, learns about the asteroid and is torn between Tanz's work and the Department of Defense's efforts, headed by Deputy Secretary Harris Anders (Ian Anthony Dale).

"It does become a geopolitical thriller, and there is a very interesting conspiracy at the center," Kruger said. Someone appears to be going to dramatic lengths to keep the government's work a secret, for example, and in the first episode, it's unclear who that is. "We will follow that trail to places I don't think anyone could have possibly imagined."

The geopolitical angle is an interesting one, Kruger said, because different solutions could potentially put different parts of the Earth in danger; it becomes a question of who controls space. And beyond just different governments, there's a question of private industry's role as well.

Tanz and Anders butt heads over how best to solve the asteroid problem, but "neither one of them is the bad guy in the situation," Shapiro said. "Harris [Anders] is the consummate man of the system who probably has never really questioned his role in the system, and Darius [Tanz] is the consummate rule-breaker, lives outside the rules by definition." [Deflecting Killer Asteroid Could Be Geopolitical Nightmare]

Cole, the MIT student, fills the role of a wide-eyed optimist, the writers said, and Barrows acts as the audience surrogate: a person out of her depth, who has to take extreme actions and make sacrifices to try and avert catastrophe.

"In today's [political] climate, there's a lot of chaos, and there is a sense sometimes of people feeling a little bit hopeless and unsettled — ['Salvation'] is about, in the face of hopelessness, how do you prevail?" Kruger said. "It's also about what one individual can do in the face of an extinction-level event.