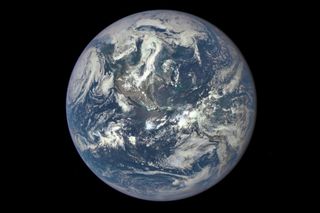 Earth gets farther from the sun today (July 3) than it does at any other point during the year.

On average, Earth lies 92,955,807 miles (149,597,870 km) from its star, a distance that has been designated 1 astronomical unit (AU). But the actual separation between the duo varies a bit over time, because Earth's orbital path is not perfectly circular.

That's why the planet goes through aphelion in early July every year and its counterpart, perihelion, in early January. The disparity between aphelion and perihelion is slight, about 3.1 million miles (5 million km), but it does make a difference.

Because Earth moves faster when it's closer to the sun, winter is about five days shorter than summer in the Northern Hemisphere, according to EarthSky. The opposite is true south of the equator (sorry, Southern Hemisphere dwellers).

But Earth's slightly elliptical orbit does not actually cause the seasons; the planet's 23.5-degree axial tilt does. It's summer north of the equator when that part of the world is tilted toward the sun and winter when it's tilted away.

The degree to which Earth's orbit diverges from the perfectly circular, known as its eccentricity, is pretty middle-of-the-road as far as our solar system goes. Venus and Neptune travel on more circular paths than Earth does, whereas Mercury, Mars, Jupiter, Saturn and Uranus have more eccentric orbits.

Mercury's orbit is the most eccentric of the eight officially recognized planets. That world is 0.31 AU from the sun at perihelion and 0.47 AU away at aphelion. (For Earth, those numbers are 0.98 AU and 1.02 AU.) But the orbit of Pluto, which the International Astronomical Union reclassified as a "dwarf planet" in 2006, is more elliptical still. Pluto gets within 29.7 AU of the sun at perihelion and zooms all the way to 49.3 AU out at aphelion.