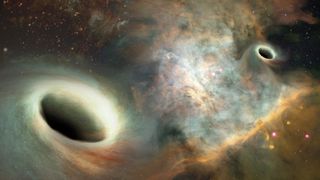 Artist's conception of the pair of supermassive black holes orbiting each other at the center of galaxy 0402+379, located 750 million light-years from Earth.
(Image: © Josh Valenzuela/University of New Mexico)

For the first time ever, scientists have directly spotted a pair of supermassive black holes orbiting each other, a new study suggests.

This orbital motion — which was noted in observations made over the course of a dozen years — may be the smallest-ever movement detected of an object across the sky, the researchers said.

Supermassive black holes harbor millions to billions of times the mass of Earth's sun and form the hearts of most, if not all, large galaxies. Much remains uncertain about how these giant black holes grow and influence the universe around them. [Images: Black Holes of the Universe]

One way to gain insights on black hole growth is to look at black holes on the verge of merging with one another. As such, researchers have analyzed the center of a giant elliptical galaxy called 0402+379, which is located about 750 million light-years from Earth. In 2006, scientists found that the galaxy's core apparently holds two supermassive black holes.

Judging by the gravitational effects these black holes had on their surroundings, the two behemoths harbor a combined mass about 15 billion times that of the sun, the researchers said. It remains uncertain just how big each black hole is, but the limited data that astronomers currently have suggest that one of the black holes might be two or even four times bigger than the other, said study co-author Roger Romani, an astrophysicist at Stanford University.

These black holes are likely only about 24 light-years apart, "which is the closest together that two supermassive black holes have ever been seen before," study lead author Karishma Bansal, a graduate student at the University of New Mexico in Albuquerque, said in a statement.

The presence of these giant black holes so close together suggested that the galaxy in which they lie resulted from dozens of galaxies merging sometime in the past, the researchers said. This raises the possibility that the two black holes themselves might one day merge also, the scientists said.

To see whether that will happen, the scientists have taken snapshots of the black holes' home galaxy over the past 12 years, using the Very Long Baseline Array, a system of 10 radio telescopes that stretch from the U.S. Virgin Islands to Hawaii and from New Mexico to Alaska.

In the new study, the scientists detected one of the black holes moving at the rate of just more than 1 micro-arcsecond per year. That's about 1 billion times smaller than the smallest thing visible with the naked eye, the researchers said.

"If you imagine a snail on the recently discovered Earth-like planet orbiting Proxima Centauri — a bit over 4 light-years away — moving at 1 centimeter [0.4 inches] a second, that's the angular motion we're resolving here," Romani said in the same statement.

This may be the smallest-ever movement detected of an object across the sky, the researchers said. "Personally, I find the technical tour de force of measuring this tiny motion most impressive," Romani told Space.com.

In the past year or so, researchers have detected ripples in the fabric of space and time, known as gravitational waves. These waves emanated from pairs of black holes, each up to a few dozen times the sun's mass, in the final stages of their orbits of one another before they collided. In contrast, these new findings mark the first time astronomers have directly analyzed images to detect a pair of black holes orbiting each other, Romani said.

Although these supermassive black holes are orbiting one another, they may never meet, Romani said. The universe apparently continues to expand at an accelerating rate, suggesting that the duo "won't merge in the remaining age of the universe," he said, unless some force, such as friction from surrounding clouds of gas, brings the black holes together.

The scientists detailed their findings June 27 in the Astrophysical Journal.