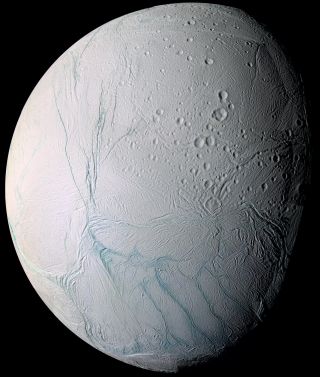 Recent studies suggest that the ocean that's sloshing beneath the icy shell of Saturn's moon Enceladus, seen here in a photo by NASA's Cassini spacecraft, may be a potentially habitable environment.
(Image: © NASA/JPL/Space Science Institute)

NASA is not preparing to drop an alien-life bombshell, despite what you may have heard.

Last week, the hacking group Anonymous posted a video on YouTube suggesting that the space agency is about to announce the discovery of life beyond Earth. The video has made a big splash online — so big that NASA science chief Thomas Zurbuchen addressed the rumor today (June 26).

"Contrary to some reports, there's no pending announcement from NASA regarding extraterrestrial life," Zurbuchen said via Twitter, where he posts as @Dr_ThomasZ.

"Are we alone in the universe? While we do not know yet, we have missions moving forward that may help answer that fundamental question," he added in another tweet today.

Anonymous' video focuses not on hacked documents but rather on testimony Zurbuchen gave back in April during a hearing of the House of Representatives' Committee on Science, Space, and Technology. (The 12-minute video also touches on some other topics, including the seven Earth-size planets circling the star TRAPPIST-1 and several supposed UFO sightings.)

During the April 26 hearing, which was called "Advances in the Search for Life," Zurbuchen laid out the progress NASA has been making in the hunt for life in the cosmos. He cited, among other things, the thousands of exoplanets spotted by the agency's Kepler space telescope, the recent discovery of hydrogen in the geysers blasting from the south pole of Saturn's moon Enceladus, and the possible detection of water-vapor plumes emanating from the Jovian satellite Europa.

In the recent video, Anonymous takes the second half of this sentence and runs with it.

"NASA: 'Mankind is about to discover extraterrestrial life,'" an Anonymous spokesman wearing the group's famous Guy Fawkes mask intones, with a digitally altered voice, at the beginning of the video.

This interpretation isn't strictly wrong. But "on the verge" is a far cry from "has found evidence," and anyone expecting an Earth-shattering announcement from NASA in the next few weeks or months is bound to be disappointed.

You can watch the April 26 hearing, and read Zurbuchen's submitted testimony, here: https://science.house.gov/legislation/hearings/full-committee-hearing-advances-search-life