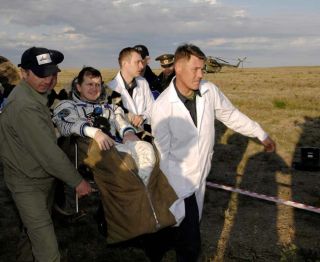 U.S. spaceflight participant Charles Simonyi is taken in his chair to the medical tent near the Soyuz TMA-9 spacecraft where the recovery officials conduct post-landing medical checks after he and two Expedition 14 astronauts returned from the International Space Station.
(Image: © NASA/Bill Ingalls.)

Americanbillionaire Charles Simonyi is reacquainting himself with gravity after atwo-week voyage to the International Space Station (ISS); an orbital trip chockfull of precious moments.

"You know, everypart had its highlights, and they just kept coming and coming," Simonyi, 58,told SPACE.com Monday via telephone from Star City, Russia. "Arriving atthe space station, for example. I knew that that would be magic, and it wasbeyond my wildest dreams how the space station looked."

Simonyi, a formerMicrosoft software developer and lifelong spaceflight enthusiast, spent nearly14 days in orbit -- 12 of them aboard the space station -- under a $20million-to-$25 million deal between Russia's Federal Space Agency and theVirginia-based firm Space Adventures. He is the world's fifth space tourist tovisit the ISS and set a new spaceflight endurance record for the longest trekby a private spaceflyer during the flight.

"I don'tsee this about records and I don't think that such a record will stand forlong," Simonyi said of his flight, which he chronicled at his Web site: www.charlesinspace.com. "I'm justhappy that we had that extra time. It would have been even busier without it,so it's kind of hard to imagine how we could have finished packing."

Simonyilaunched towards the ISS with its new Expedition 15 crew -- cosmonauts FyodorYurchikhin and Oleg Kotov -- on April 7 and returnedwith Expedition 14 commander Michael Lopez-Alegria and flight engineer MikhailTyurin on April 21. Two weeks of weightlessness left the Hungary-bornSimonyi a bit off balance, though he has already begun readaptation sessionsthat include liberal doses of swimming.

"Swimmingis actually very nice," Simonyi said. "It's just a safe way to exercise andmake an effort without falling over."

Driftingoff to sleep in a sleeping bag strung up like a hammock inside a Russiandocking compartment aboard the station was both comfortable and fun, Simonyisaid, but confessed that some terrestrial niceties were unavailable aboard theorbital laboratory.

"I wasmissing showers and beer," Simonyi said, adding that he has partaken of bothluxuries since returning to Earth. "I'm sipping a little beer right now."

Simonyi saidhe is looking forward to getting back to his work at Intentional SoftwareCorp., which he co-founded, and resuming his life on Earth.

"This was aunique opportunity and I had to do that now," said Simonyi, who oncerepresented his native Hungary as a Junior Astronaut on a trip to Moscow at age13. "I interrupted and put everything aside in my life now I have to restart mylife. The guys at Intentional Software are doing some great stuff and I want torejoin it."

Among themany images burned in Simonyi's mind from his spaceflight are the dazzlingtransitions between night and day in Earth orbit.

The ISSorbits the Earth once every 90 minutes, giving astronauts 16 sunrises andsunsets every 24 hours. Simonyi and the Expedition 15 crew docked at the ISS onApril 9 just as the Sun set over the horizon with amazing speed, which thespace tourist likened to the lighting of a modern opera during his flight.

"When theyhappen, the color of everything changes," Simonyi said of sunsets in space. "Inabout 10 seconds it changes from brilliant white, through all the shades toessentially invisible black...that was sunset someplace.

"I did notknow what I was looking at, but it was the most incredible thing," Simonyisaid.

During his12 days aboard the ISS, Simonyi performed a series of experiments for theFederal Space Agency, European Space Agency, Japan Aerospace Exploration Agencyand the Hungary Space Office. He also madenumerous radio and video broadcasts from orbit, many of which conductedwith students on Earth, in efforts to spur interest in human spaceflight,science and technology.

"We hadfour million visitors to the Web site...I can't even imagine such a number,"Simonyi said, adding that he was able to answer about 100 questions pertainingto life in space during his flight. "We are going to put more material [online]and I think it's going to be great to be able to share this experience."

Simonyisaid he was surprised to learn about the finer details of life in space, suchas the relative ease of eating beef and vegetables -- which stuck together whenthey drifted free of a fork -- when compared to the multi-step process ofpreparing a juice drink from its powdered form (which requires pumping a bagfull of lukewarm water, mixing it up, then letting it cool before attemptingthe tricky task of inserting a straw without spilling wet liquid spheres aroundthe space station).

"I don't knowwhere spaceflight would be without Velcro," Simonyi said, adding thatspaceflyers get a certain despondent look on their faces -- one he also woreduring the flight -- when searching station walls and air filters for lostitems. "Even with all that Velcro, it's pretty difficult to get simple thingsdone."

Simonyi hassaid he hopes his trip encourages others to take similar voyages, each of whichwill lead to even larger steps to further space exploration.

"When youlooking at 'Star Trek', there has to be some path to get there," Simonyi saidbefore flight. "And I think that now's the time to make the incremental steps."