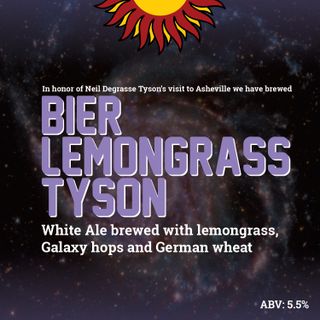 Neil deGrasse Tyson has plenty to raise a glass to this month.

Not only did the famed astrophysicist become the first American to receive the Stephen Hawking Medal for Science Communication on Tuesday (June 6), but he's also getting his very own beer, courtesy of the Asheville Brewing Co. in North Carolina.

An American version of the Belgian witbier, the Bier LemonGrass Tyson will debut on July 13, the same day Tyson rolls into Asheville for "An Astrophysicist Goes to the Movies," his talk about the real science behind such movies as "Star Wars," "Gravity" and "The Martian."

"We wanted to make a beer to celebrate science and to honor one of science's rock stars coming to our town," Mike Rangel, the microbrewery's president, said in a statement.

The Asheville Brewing Co. didn't have to look far to divine Tyson's tastes. In a video for StarTalk, the National Geographic Channel program that he hosts, Tyson admitted to a yen for weissbier, a south German form of wheat beer, as well as Belgian ale. (He also copped to being more of a "wine guy.")

"I realized I had never had beer before, once I had a Belgian beer, because it tasted unlike anything I had ever had, certainly here in America," Tyson said. "So if there's a lineup, I'm choosing the Belgian beer — unless I'm in some town that has local breweries and they didn't have to move the beer far to get to the dispenser." [Watch: Space.com's Space Beer Adventure]

In a clever nod to Tyson's field of expertise, they also dry-hopped it with a cultivar of hops known as Galaxy.

"The pronounced fruit notes of Galaxy hops softens and balances the spice character of the Belgian yeast, while the lemongrass and orange peel add a layer of complexity to the flavors," said Pete Langheinrich, the company's head brewer.

The beer will be available on draft and in a limited number of 22-ounce bottles at the microbrewery's north and downtown locales. As a bonus, a dollar from every pint and bottle sold will benefit the new Asheville Museum of Science.

"We heard you, Neil, and we made this beer for you!" Rangel said.