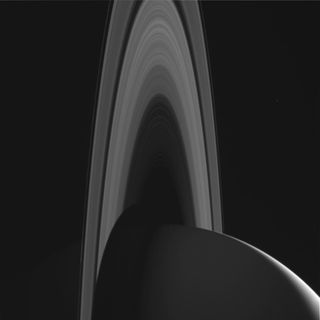 The Cassini spacecraft captured this raw image of Saturn on June 7 on the way to its eighth dive between the planet and its rings.
(Image: © NASA/JPL-Caltech/Space Science Institute)

The Cassini spacecraft has made its eighth dive between Saturn and its rings, documenting the planetary system up close as it prepares for its Grand Finale plunge into the gas giant on Sept. 15.

After passing through the edge of Saturn's innermost ring on the previous two dives, Cassini had an easier path this time: on June 10 it crossed 2,670 miles (4,300 kilometers) from the inner edge of the D ring through empty space. It didn't need to turn its large antenna dish to use as a shield, so the spacecraft was communicating with Earth throughout the crossing.

During this orbit, Cassini measured the pull of Saturn's gravity to help understand its shape and the rings' mass, according to NASA's Grand Finale orbit guide. The spacecraft, which is a collaboration among NASA, the European Space Agency and the Italian Space Agency, also used its Cosmic Dust Analyzer to investigate ring particles it scooped up on the way.

The spacecraft is also mapping Saturn's southern hemisphere at a high resolution, so scientists can investigate how the winds, cloud structures and atmospheric chemistry change over the planet's seasons. (Cassini captured the image featured here on June 7 as the spacecraft approached Saturn's rings three days before this most recent dive.)

On its next orbit, with a ring crossing June 16, Cassini will try to capture ultraviolet and infrared images of Saturn's entire aurora and study the interactions between Saturn's rings and atmosphere.

Just 14 more orbits before the spacecraft's Grand Finale, when it will dive down into Saturn, taking measurements all the while before losing contact and being crushed. The maneuver will provide one-of-a-kind measurements of the planet's atmosphere and protect Saturn's moons from possible contamination after the spacecraft loses power and maneuvering ability.