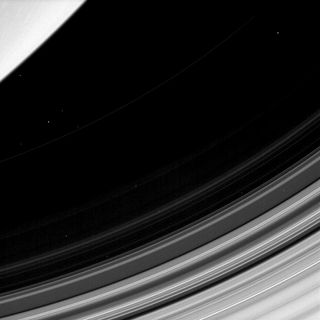 Saturn's D ring is visible as the faint gray line arcing up to the top right of the image in this view from Saturn's Cassini spacecraft, taken in 2014. Over the course of four plunges, Cassini will be getting much more familiar with the ephemeral ring.
(Image: © NASA/JPL-Caltech/Space Science Institute)

The Cassini spacecraft completes its sixth dive between Saturn and its rings today (May 28), and this is the most dangerous dive yet. Instead of passing safely between the planet and its rings, the spacecraft is plunging straight through the inner edge of Saturn's D ring.

The spacecraft, which is a collaboration between NASA, the European Space Agency and the Italian Space Agency, will turn its broad, high-gain antenna dish to rest in front of it as a shield during the crossing, for the first time since its very first ring dive, which occurred in April, NASA officials said. (For that dive, researchers didn't know whether the area between the rings and Saturn would be clear of debris.)

This dive is the first of four paths through the planet's faint innermost ring, and it's the deepest Cassini will go into the dusty loop, according to NASA's Grand Finale Orbit Guide. The spacecraft will make the crossing at 10:22 a.m. EDT (1422 GMT), but researchers don't expect to hear back from it until 11:29 p.m. EDT (0329 on May 29 GMT) once it is able to turn and reestablish contact with Earth. [Cassini's Journey into the Unknown: NASA Engineer Talks Saturn Risks & Rewards (Video)]

Researchers have identified the 6-minute period when Cassini is most likely to collide with ring particles. During this time, the spacecraft's Radio and Plasma Wave Science instrument will be poised to detect the plasma clouds released when particles hit the antenna dish. The instrument sticks out past the dish, letting it take stock of particles while the rest of the craft is protected, the guide said.

During this orbit around Saturn, Cassini has been taking photos of the edge of the planet's A and F rings, as well as the space between, to investigate the rings' structure and how their particles interact. It also used the Radar instrument to scan all the way from the A ring's outer edge through the C ring, in the first of a three-part radio-wave experiment.

Cassini's next dive will also take it through the edge of the D ring, although not as far, and it will have two more opportunities after that to get firsthand experience of the planet's ephemeral innermost ring.

After Cassini completes all 22 ring dives, it will begin the final phase of its Grand Finale mission: plummeting into Saturn's atmosphere on Sept. 15 in its most dangerous (and fatal) dive of all. The spacecraft will send data back until it loses contact and burns up; the maneuver will protect Saturn's moons from any further contamination by Earth microbes and collect invaluable details about the planet's atmosphere in its last moments.

But in the meantime, Cassini has lots of science to do.