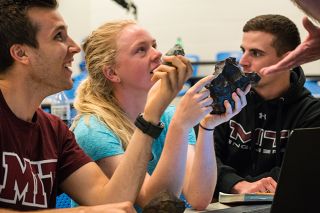 Students from the Massachusetts Institute of Technology (MIT) have designed a close-range mission to analyze the huge asteroid Apophis, which will pass extremely close to Earth in 2029.

Asteroid Apophis, which measures 350 meters across and weighs 20 million metric tons, will come within 19,400 miles (31,300 kilometers) of our planet during its 2029 flyby. The asteroid is expected to closely buzz past Earth again in 2036. However, the giant space rock poses no threat to Earth during either flyby.

The MIT Project Apophis, led by 20 students in the Space Systems Engineering course, aims to build a robotic spacecraft that can get close enough to the asteroid to measure its shape, size, density, surface topography, surface composition, rotation rate and spin state. These measurements will help to determine the internal structure and potential long-term impact hazard of Apophis, according to a statement from MIT. [Huge Asteroid Apophis Revealed in Photos]

The students have presented their design to NASA Planetary Defense Officer Lindley Johnson and other officials from NASA headquarters and the Jet Propulsion Laboratory, who said the work so far is "almost ready for a NASA proposal," according to the statement.

A NASA spacecraft would have to launch in August 2026 to reach the correct observation position to measure the asteroid before, during and after the 2029 flyby, the statement said.

The MIT project is the first significant attempt to study Apophis, and would help scientists understand the hazards posed by asteroids. Richard Binzel, a professor of planetary sciences at MIT who is one of two leading the class, said in the statement that he hopes the project encourages further studies by international space agencies.

Although there have been other missions to comets and asteroids, Project Apophis is unique because the asteroid "is coming so close that Earth's gravity is going to tug and redirect its path," David Miller, the Jerome C. Hunsaker Professor of Aeronautics and Astronautics at MIT, said in the statement. Miller recently returned to MIT after serving as chief technologist for NASA and is working alongside Binzel to help the students with their mission design.

"The outcome of that planetary torque will teach scientists more about the construction of asteroids, which were some of the early building blocks of our own solar system," MIT representatives said in the statement. "More pragmatically, what we learn from the Apophis encounter could strengthen our knowledge of how to mount a planetary defense in the event an asteroid was ever discovered and verified to be on an impact course."