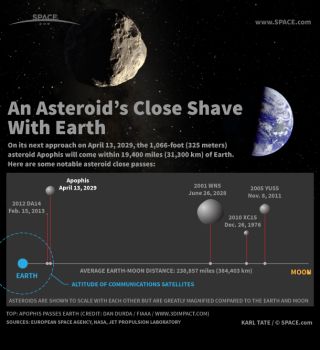 After its discovery in 2004, astronomers gave the asteroid Apophis a 2.4 percent chance of hitting the earth during its close flyby on April 13, 2029.  If the 1,066-foot (325 meters) asteroid were to strike our planet, the blast could equal hundreds of megatons.

Fortunately, further analysis showed that Apophis will miss the Earth by 19,400 miles (31,300 kilometers) in 2029. Extrapolating further into the future, another approach in 2036 is an even bigger miss. Apophis has only a one in a million chance of hitting Earth on that pass.

An asteroid that approaches Earth closely is called a Near Earth Object, or NEO. Astronomers track these objects carefully to provide early warning if one is discovered to be on a collision course with Earth. [See Photos of Giant Asteroid Apophis]

Comets also pose an impact threat, but in Earth’s part of the solar system asteroids outnumber comets 100 to 1.

On February 15, 2013, the newly discovered asteroid 2012 DA14 will pass lower than the belt of communications satellites that girdles Earth’s equator at an altitude of 22,236 miles (35,786 kilometers).

NASA scientists calculate that 2012 DA14 poses no threat of collision with the Earth. The asteroid is estimated to be about 150 feet (45 meters) across.