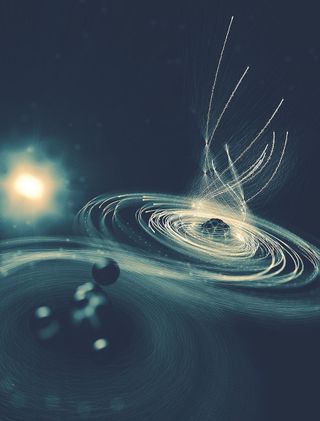 X-ray flash knocks so many electrons out of the iodine atom (right) such that it pulls in the electrons of the methyl group (left) like an elecetromagnetic version of a black hole, before finally spitting them out.
(Image: © DESY/Science Communication Lab)

The world's most powerful X-ray laser has created a molecular "black hole."

The black hole is not a tiny version of the supermassive celestial object that devours everything within its event horizon. Rather, when X-ray energy is aimed at a molecule, it strips away so many of the electrons that it creates a void that then sucks in all the electrons from nearby atoms — in black-hole fashion.

"It basically sucked all the electrons away from the surrounding environment," said study co-author Sebastien Boutet, a physicist at the SLAC National Accelerator Laboratory in Menlo Park, California. "It's an analogy to how a black hole gravitationally pulls everything in." [Brightest X-Ray Laser 'Blows Up' Water Droplets in Stunning Video]

The molecular black-hole effect occurs thanks to the most intense X-ray beam of its kind — equivalent to focusing all the sun's light onto a spot the size of a thumbnail.

The experiments relied on the SLAC's Linac Coherent Light Source X-ray free-electron laser, which generates extremely high-energy laser pulses known as hard X-rays. Boutet and colleagues then used a series of mirrors to focus that X-ray energy onto a spot about 100 nanometers in diameter. (A human hair is about 70,000 nanometers wide, where 1 nanometer is one-billionth of a meter.)

These focused laser pulses then illuminated isolated xenon atoms and molecules of iodomethane (CH3I) and iodobenzene (C6H5I). The intense energy was tuned so that the X-rays would strip electrons first from the innermost energy shells of the iodine atoms. (Electrons whirl around the nucleus of an atom in shells, or orbitals, with different energy levels.) At first, everything acted as predicted: Like pinballs, the outer electrons cascaded from the outermost electron orbitals into the innermost shells, where they would also be ejected by the X-ray pulses.

Though dramatic, that initial process was expected. However, X-ray pulses didn't just deplete the outer shell of iodine's electrons: The iodine atom, which normally contains 53 electrons, continued to suck in electrons from neighboring carbon and hydrogen atoms in the molecule — after which they were violently ejected as well. All told, the iodine molecules lost 54 electrons — more than the atoms initially started with.

The whole process occurred in just 30 femtoseconds, or one quadrillionth of a second. At the end of this dramatic cascade, the molecule exploded.

Simple in theory, not in practice

The findings suggest that some of the basic models physicists have used in the past to capture the impact of X-ray laser pulses may be lacking, Boutet said.

"Even for something relatively simple, a six-atom system, it ends up being pretty challenging to predict how the damage will occur," Boutet told Live Science.

The findings could help scientists better model the radiation damage incurred by the powerful laser pulses, which are frequently used to visualize intricate organic molecules, such as viruses, enzymes and bacteria, he added.

While the process underpinning the molecular black hole is dramatic, it likely has never happened before  on Earth.

"There's some celestial events that will create these intense fields, like supernovas," Boutet said. "It does not happen naturally in any place that we humans happen to be."

The findings were published today (May 31) in the journal Nature.