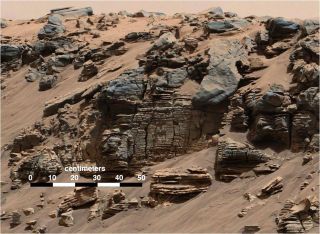 This image by NASA's Mars rover Curiosity shows very fine-grained sediments, which fell down through the water of a lake that existed inside the Red Planet's Gale Crater billions of years ago
(Image: © NASA)

Billions of years ago, rain on Mars was heavy enough to shape the planet's surface, carving channels into the red dirt and washing away parts of impact craters, new research suggests.

Some of the Red Planet raindrops falling in the ancient past were likely even bigger than the ones we're used to here on Earth, according to the study.

The study's authors — Robert Craddock of the Smithsonian Institution in Washington, D.C., and Ralph Lorenz of the Johns Hopkins University Applied Physics Laboratory in Laurel, Maryland — modeled the rainfall of ancient Mars by taking into account how the planet's atmosphere has changed over the eons. [Photos: The Search for Water on Mars]

Just after Mars formed about 4.5 billion years ago, it likely had a thick atmosphere with a pressure that was about four times that of Earth's current air, the researchers determined. They calculated that such high pressures would have resulted in tiny raindrops just 3 millimeters or so across.

But pressure dropped on Mars as the years went on, changing the nature of the planet's rain, the researchers said.

"By using basic physical principles to understand the relationship between the atmosphere, raindrop size and rainfall intensity, we have shown that Mars would have seen some pretty big raindrops that would have been able to make more drastic changes to the surface than the earlier fog-like droplets," Lorenz said in a statement.

At an atmospheric pressure equivalent to that of Earth's, for example, Martian raindrop diameter likely maxed out at about 7.3 mm — nearly 1 mm larger than current Earth drops, the researchers found.

"However, rainfall from such a storm would be only about 70 percent as intense on Mars, primarily due to the lower Martian gravity and resulting lower terminal velocities of the raindrops," Craddock and Lorenz wrote in the new study, which was just published online in the journal Icarus.

"There will always be some unknowns, of course, such as how high a storm cloud may have risen into the Martian atmosphere, but we made efforts to apply the range of published variables for rainfall on Earth," Craddock said in the statement. "It's unlikely that rainfall on early Mars would have been dramatically different than what's described in our paper. Our findings provide new, more definitive, constraints about the history of water and the climate on Mars."

That history has been an eventful one. Data collected by NASA's Mars-orbiting MAVEN spacecraft suggests that, by 3.7 billion years ago, the solar wind had stripped away most of the Red Planet's air. Today, Mars' carbon dioxide-dominated atmosphere is just 1 percent as thick as that of Earth.

As a result of this loss, Mars shifted from a relatively warm and wet world — with rivers, lakes and perhaps even oceans — to the cold and dry planet we know today.