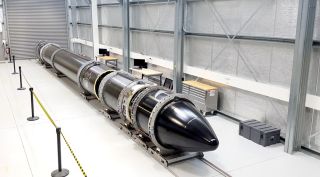 Rocket Lab's Electron rocket, seen here in a hangar at the company's New Zealand launch site, is scheduled to launch for the first time on May 21.
(Image: © Rocket Lab)

When Rocket Lab's small satellite launcher blasts off from New Zealand next week on its debut test flight, it will be more than just the Electron rocket that is on trial.

The flight, which Rocket Lab playfully named "It's a Test," also will serve as a shakedown for the world's first commercial spaceport for orbital flights and as a test of procedures for launching from a country that has never flown a rocket into space before.

"It's a test of not just the launch vehicle, but all this brand-new infrastructure," Rocket Lab founder and chief executive Peter Beck said in an interview with Space.com. "There's apt to be some teething problems." [Electron Rocket Arrives at Launch Pad In New Zealand (Video)]

Although the rocket is flying from New Zealand, Rocket Lab's home base, the company also has headquarters in Los Angeles, putting launch oversight in the hands of the U.S. Federal Aviation Administration.

On Monday (May 15), the FAA issued a license for Rocket Lab to launch three test flights of its Electron rocket from Mahia Peninsula, located in Hawke's Bay on the east coast of New Zealand's North Island.

No matter what results from the rocket's first flight, the second launch will not occur until sometime this summer, Beck said.

"We don't want to just fly one and then turn right around and fly the second one. We want to learn from the first flight," he said. "Even if it's really successful, there's still probably a couple of months of data analysis to go through and understand what margins we had, or if there are any improvements we can make."

The two-stage, liquid-fuel Electron rocket is powered by 3D-printed Rutherford engines that include first-of-its-kind electric turbopumps. The carbon-composite rocket is designed to deliver a payload weighing up to about 330 lbs. (150 kilograms) into a 311-mile-high (500 kilometers), sun-synchronous orbit for about $5.5 million per launch.

For its debut flight, the Electron will not be carrying any commercial payloads. Instead, the rocket is expected to put its heavily instrumented second stage into an elliptical orbit ranging from 186 miles to 311 miles (300 to 500 km) in altitude and inclined 83 degrees relative to the equator.

"There's over 20,000 channels of instrumentation on the vehicle," Beck said. "This flight program is all about gathering data together to understand vehicle performance. "

Rocket Lab's goal is to begin flying satellites for commercial customers this year. Among those waiting for rides are Cape Canaveral-based Moon Express, which is making a run for the $30 million Google Lunar X Prize, which has a launch deadline of Dec. 31.

"All customers have deadlines," Beck said. "We've been lucky that all our customers really want to see a good, solid launch vehicle ... We don't want to be experimenting with launch vehicles with customers' payloads aboard."

"We've come out of the ground-test program very successfully," Beck added. "Now we're just moving to the flight-test program … another step in the journey. The real prize is when we start flying commercially."