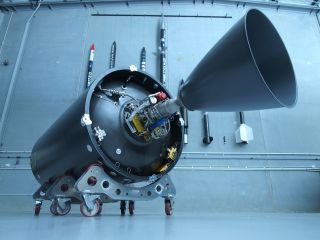 The second stage of the Rocket Lab Electron rocket. A new influx of funding will allow the company to increase production of the Electron.
(Image: © Rocket Lab)

The spaceflight company Rocket Lab, which aims to provide frequent, relatively cheap trips to space for small payloads, has raised an additional $75 million in funding ahead of its first test launches, the company announced today.

Rocket Lab will use its orbital Electron rocket to launch payloads weighing up to about 500 lbs. (225 kilograms). Following the recent completion of its private launch facility in New Zealand, the company said it plans to make its first test launch of the Electron in "the next month or two," followed by two additional tests ahead of the first commercial launches.

The new funding "will enable us to scale up production of Electron to meet the continued high demand we’re seeing from the growing small-satellite industry," Peter Beck, Rocket Lab's CEO and founder, said in a statement from the company. [Satellite Quiz: How Well Do You Know What's Orbiting Earth?]

Beck's vision for the company is to make about one launch per week, although that is still a distant goal. Beck told Space.com that Rocket Lab is aiming to make about 19 launches in 2018. By comparison, there were 85 orbital launch attempts worldwide in 2016, including 22 on U.S. soil, 22 in China and 19 in Russia.

The new small spacecraft technology has enabled the birth of very small satellites, some no bigger than a lunchbox. To get these instruments into space, the satellite owners must "piggyback" a ride with larger payloads, according to NASA. That can put limits on the timing of the launch and the orbital destination of the satellite. Rocket Lab was one of three companies to earn contracts with NASA to send small satellites into space by April 2018.

"Rocket Lab’s mission is to provide frequent satellite launch opportunities, which will revolutionize the ability of satellite companies to reach orbit – many of these companies currently have had assets sitting on the shelves for years, waiting for launch," according to a statement from Rocket Lab.

Rocket Lab has manufacturing facilities in Hawthorne, California (where its headquarters are  located), as well as in New Zealand. Beck is a native of the island nation, but said that's not the reason he picked it for the location of the company's first launch site. The remote location is relatively quiet regarding air traffic, Beck told Space.com last year, which makes it easier for the company to maintain a flexible and frequent launch schedule.

The launch facility's location also lets the company send payloads to a wide range of orbits. Beck said, however, that Rocket Lab is planning to build launch facilities in other locations — including one at the Kennedy Space Center in Florida — to further increase that orbital access.

The new funding comes from two venture capital funds that are investing in Rocket Lab for the first time — Data Collective and Promus Ventures — as well as one undisclosed investor, and three investment groups that have funded Rocket Lab in previous rounds. Data Collective has also invested in Planet (formerly Planet Labs), a company that is using small satellites to image the surface of the Earth frequently and in high resolution. Planet, which has already signed a launch agreement with Rocket Lab, currently operates 149 small satellites in orbit — the largest fleet in human history, according to the company. A representative from Data Collective will also join Rocket Lab's board of directors.

"The really nice thing about the investors that we've brought on, [is] they all have very good space experience," Beck told Space.com. "We certainly enjoy having investors on board who understand space, and the challenges that go along with that, but also the opportunity."