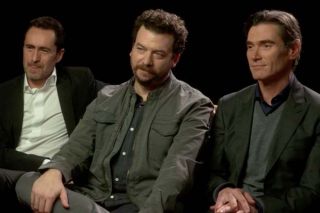 LONDON — As crewmembers of the Covenant spaceship, they spent years traveling toward the distant planet Origae-6, with the goal of establishing a colony to secure the survival of humanity.

But that's science fiction. In real life, the actors who star in "Alien: Covenant" — Ridley Scott's new installment in the "Alien" film saga, which opens in theaters across the United States Friday (May 19) — don't seem all that excited about venturing into the final frontier. And you can't really blame them. As with every "Alien" mission, the Covenant's trip didn't turn out exactly as the crew and the passengers had hoped, ending in a horrific fight for life.

"If somebody said, 'Do you want to go to space?' and the opportunity arose, I would take it," said Michael Fassbender, who reprised his role as the android David from 2012's "Alien" film "Prometheus" and added a second one as an upgraded version of the robot called Walter. [9 Terrifying Extraterrestrials from the 'Alien' Movies]

"But it's not on my bucket list or anything," Fassbender told Space.com here earlier this month.

The film's main star, Katherine Waterston, portrays a bereaved terraforming expert named Daniels who turns into a kickass monster-fighting warrior in the film. In real life, however, she finds the time commitment of space travel, especially the intergalactic type, quite off-putting.

"I don't think they would be able to offer that kind of spaceship that I would want to travel on in my lifetime: one that flies as quickly as from New York to London," she said.

Even the film's director, the legendary Sir Ridley Scott (who also directed the original 1979 "Alien" and the 2015 smash hit "The Martian"), admitted he is not of a particularly adventurous spirit.

"Are you kidding me? I like it here," said Scott, who also directed "Prometheus," which takes place 10 years before the events of "Covenant."

Billy Crudup (who plays Covenant's second in command, Christopher Oram) and Danny McBride (who plays the ship's pilot, Tennessee) agreed with the rest of the cast.

"We are not going anywhere," Crudup said.

"I get motion sickness," McBride said. "I feel like it would be rough just getting out of the atmosphere. I will let everyone else leave, and then I'll just wander around and take stuff from their houses."