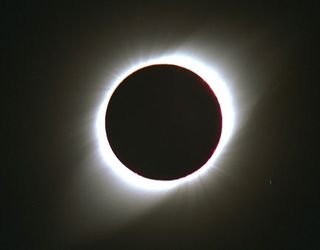 Astrophysicist and eclipse expert Fred Espenak, also known as Mr. Eclipse, has traveled the world observing and photographing solar and lunar eclipses. He's currently gearing up for the Aug. 21, 2017, total solar eclipse, which will cross the continental United States from coast to coast — the first time a total solar eclipse has done so since 1918.

Two of Espenak's photos, of a 2006 total solar eclipse and of the moon, made their way onto a new, color-changing U.S. stamp celebrating the upcoming eclipse, and Espenak said he's planning to buy up a lifetime's supply.

Espenak gives eclipse photographing and viewing advice on his website, MrEclipse.com, and Space.com caught up with him to hear about his eclipse background, his crucial tips for eclipse-viewing newcomers and — most importantly — what he'll do if it's looking like rain before the Aug. 21 event. [Total Solar Eclipse 2017: When, Where and How to See It (Safely)]

Space.com: How many total solar eclipses have you seen?

Fred Espenak: I've been to 27 total eclipses, and I've seen about 20 of them. [The rest were obscured] by weather, clouds.

Space.com: How many continents have those eclipses been on?

Espenak: I've seen a total eclipse from every one of them — including Antarctica. And it's been a wonderful way to see the world. The eclipses take you to really unusual, off-beat places that you might not normally plan a vacation to, but they're wonderful places to go.

Space.com: What was the first total solar eclipse you saw?

Espenak: The first total eclipse that I witnessed was in 1970. It passed along the East Coast of the U.S., and I saw it from North Carolina, and I thought it was one of these once-in-a-lifetime chances to see a total eclipse — I was an amateur astronomer. But after I saw the total eclipse, it couldn't be a once-in-a-lifetime experience, because it was too spectacular. I needed another eclipse fix, because I got hooked on the shadow.

Space.com: Do you have any tips for people viewing their first total solar eclipse?

Espenak: The important thing for the partial phases is to pick up a pair of these inexpensive eclipse glasses that can be found on the internet and through astronomy magazines and such. They're only a couple dollars each, but they're great for watching the partial phases.

Tip number two — when totality begins, you take those glasses off, and it's a hundred percent safe to look at the sun. Actually, you won't see the sun, because the sun will be hidden behind the moon, and what you'll see is the sun's outer corona surrounding it.

I also recommend for people, if this is the first time they're going to see an eclipse, don't get bogged down in trying to take pictures of it, because you'll spend much too much time fiddling around with cameras. Unless you've got the strength to just take a quick snapshot and let it go at that and not mess with the camera. Try to drink it in with your eyes and enjoy it. [How to Safely Watch the 2017 Total Solar Eclipse]

Space.com: Is it clear when the sun is completely gone and it's safe to look at?

Espenak: It's very distinct. You go from bright sunlight to twilight in a matter of 10 seconds. And everybody around you will start screaming like the home team just made a touchdown at the Super Bowl. It will be unmistakable when it's safe. Plus, if you're looking through the eclipse glasses, the crescent sun will get thinner and thinner and thinner, and then it will vanish. Then it's totality, [and] it's safe to look.

Space.com: If viewers were to photograph it, do you have any advice?

Espenak: For the average person, you could just use your smartphone, your cellphone, and take a couple of snaps with that. Just leave it on auto and shoot, and take a couple of quick shots with it. During totality, it does get quite a bit darker, so you can brace yourself against a wall or post or an automobile to help steady your hands when you take the pictures. They'll come out sharper.

To shoot with some kind of a zoom lens or a telephoto lens on a DSLR or something like that, first of all, you've got to get that lens equipped with a solar filter on the front of it for the partial phases. And then you've got to be able to take that filter off nice and smoothly when totality begins so you can shoot totality through the camera. A tripod is recommended to keep the camera stable during totality. I've got a web page about how to photograph a solar eclipse on MrEclipse.com that has a lot of tips and information.

Space.com: Would you suggest for people who aren't in the path of totality to try and travel there?

Espenak: If you're outside the path of totality, if there's any way you can get into the path of totality for the eclipse, do it. Take the day off. Take the kids out of school. This is a once-in-a-lifetime opportunity for most people to see a total eclipse, and it is one of the grandest sights in all of nature. It's something you'll always remember, and you'll pass stories of it onto your grandchildren.

Space.com: Where will you be for the eclipse?

Space.com: How accurate are the forecasts in that time frame?

Space.com: If the forecast said it would be rainy and cloudy everywhere, where would you go?

Espenak: I would stay put! If I were in Casper and that were the forecast, there's no point in going anyplace. Just stay right there and hope that the forecast is wrong. There's still something to see, even if it's cloudy out, because you'll still experience the sudden onrush of darkening during totality. It pales in comparison to actually seeing the eclipse, but it's still something to experience.