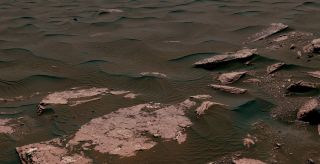 This image by NASA's Curiosity Mars rover shows two scales of ripples, plus other textures, in an area where the robot examined a linear-shaped dune in the Bagnold dune field on lower Mount Sharp in March and April 2017.
(Image: © NASA/JPL-Caltech/MSSS)

NASA's Mars rover Curiosity has snapped some additional stunning vistas of the black sand dunes that have captured its attention for parts of the past 18 months.

The newly released photos show a section of the Bagnold Dunes, a big black-sand field that lies on the northwestern flank of Mars' 3.4-mile-high (5.5 kilometers) Mount Sharp.

From early February through early April of this year, Curiosity studied four different sites near a linear dune within Bagnold. The car-size rover is now driving uphill and away from this area, carrying a sand sample with it as it goes, NASA officials said. [Amazing Mars Photos by NASA's Curiosity Rover (Latest Images)]

Curiosity arrived at a different part of Bagnold in late 2015. The six-wheeled robot soon began examining some crescent-shaped dunes, kicking off the first-ever close-up investigation of active sand dunes on a world other than Earth.

"At these linear dunes, the wind regime is more complicated than at the crescent dunes we studied earlier," Mathieu Lapotre, of the California Institute of Technology in Pasadena, said in a statement.

"There seems to be more contribution from the wind coming down the slope of the mountain here compared with the crescent dunes farther north," added Lapotre, who helped lead the planning for Curiosity's dune campaign.

The rover has already analyzed part of the linear-dune sample using its onboard Sample Analysis at Mars (SAM) instrument. Curiosity's handlers plan to put other portions into SAM and another instrument, called CheMin (short for Chemistry and Mineralogy), on the rover's body, NASA said.

Mission team members had several reasons for driving away before completing the sample analysis, NASA officials said. First, strong winds at the linear-dune site were making it difficult to deliver the sand into Curiosity's instrument ports. Also, engineers are still trying to figure out whether using vibration to help pour sand into the ports affects the rover's rock-boring drill.

A problem with the drill's feed mechanism cropped up five months ago, and Curiosity hasn't drilled into a rock since.

"In some cases, vibration has been observed to change feed effectiveness, so we're proceeding cautiously until we better understand the behavior," Lee added. "In the meantime, the engineering team is developing several methods to improve feed reliability."

Curiosity landed inside Mars' 96-mile-wide (154 kilometers) Gale Crater in August 2012, tasked with determining whether the area could have once supported microbial life. The rover soon found evidence that Gale harbored a potentially habitable lake-and-stream system for long stretches in the ancient past.

Curiosity is now working its way up the foothills of Mount Sharp, which rises from Gale Crater's center. The robot is studying the rock layers as it climbs, searching for clues about when and how the Red Planet shifted from a relatively warm and wet world billions of years ago to the cold and dry place it is today.