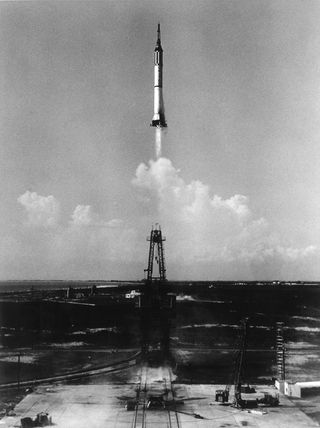 On September 9, 1959, the Big Joe launch vehicle took off for a suborbital test of the Mercury capsule. After a successful launch from Cape Canaveral, Florida, the capsule was recovered after an equally successfully reentry test.

A November 4, 1959 suborbital test flight of the Mercury capsule test article launched atop Little Joe-2. While the vehicle, which was launched from Wallops Island, functioned as hoped, the escape rocked was several seconds late in firing.

A rhesus monkey known as Miss Sam rides in a model of the fiberglass contour couch. Inside this container she will launch in the Little Joe 1B suborbital test flight of the mercury Capsule.

The unmanned Mercury-Redstone 1 launch test on November 21, 1960, began and ended when the engine cut off prematurely after the rocket rose a few inches from the pad. The escape tower was jettisoned, but the spacecraft did not separate from the booster. The Mercury capsule was refurbished and later launched as with a new launch vehicle as Mercury Redstone 1A.

Before launching from Wallops Island, the Little Joe-5 was photographed for a view of the prelaunch fittings. During the suborbital test flight was a failure when the capsule did not separate from the booster.

On December 19, 1960, the unmanned Mercury Redstone 1A launched from Cape Canaveral for a successful flight to the peak altitude of 135 miles and a horizontal distance of 235 miles.

Debris from the Mercury-Atlas 1 spacecraft, which exploded one minute after launch, was gathered and reassembled for study.

A diagram depicts how the G2498 Little Joe 5A looks for launch and the systems used.

Not a Complete Loss

During the March 18, 1961 launch of the Little Joe-5A, the escape rocket motor fired prematurely and before the capsule was released. After the unsuccessful launch, the Mercury capsule was recovered with the parachute floating, still attached to the capsule

During preflight activities for a January 31, 1961 test flight of the Mercury-Redstone 2, Chimpanzee "Ham" worked with a handler.