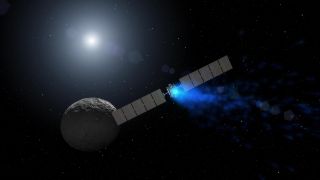 The malfunction occurred on Sunday (April 23), as Dawn was preparing for a planned Saturday (April 29) observation of Ceres' mysterious Occator Crater from an "opposition" position. This geometry, in which the spacecraft will be directly between the crater and the sun, could reveal new insights about Occator and its intriguing bright spots, NASA officials said.

Dawn has now lost three of its four reaction wheels, but such failures haven't unduly affected the probe, which has been orbiting the 590-mile-wide (950 kilometers) Ceres since March 2015. (Before that, Dawn circled the protoplanet Vesta — the second-largest body in the asteroid belt, behind Ceres — from July 2011 through September 2012.)

"This experienced group of space explorers knows how to do it without the reaction wheels," Rayman wrote in a mission update on Tuesday (April 25). He added, parenthetically, "(For most of the time since Dawn left Vesta in 2012, including the first year of Ceres operations, all four wheels were turned off. This will be no different.)"

Dawn should still be able to carry out the Occator opposition observations on Saturday and perform other work as desired, Rayman and NASA officials said.

The $467 million Dawn mission launched in September 2007, with the primary goal of learning more about the solar system's early days by studying Ceres and Vesta, two building blocks left over from the planet-formation era (hence the mission's name).

Dawn wrapped up its primary mission in June 2016 and is now operating on an extended mission. The spacecraft is the first ever to orbit a dwarf planet and the first to circle two separate objects beyond the Earth-moon system.