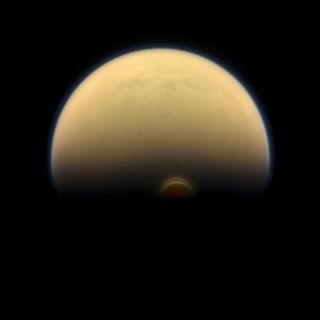 The south polar vortex at Saturn's moon Titan stands out against the orange and blue haze layers that are characteristic of Titan's atmosphere.
(Image: © NASA/JPL-Caltech/Space Science Institute)

Unlike anywhere else in the solar system, Saturn's moon Titan is brighter during twilight than during daylight, a new study finds.

Titan is bigger than the planet Mercury, making it the largest of the more than 60 known moons orbiting Saturn. Titan is also the only moon in the solar system that's known to have a thick atmosphere. In fact, the atmospheric pressure near Titan's surface is about 60 percent greater than Earth's — that's about the same pressure found at the bottom of a swimming pool on Earth, according to NASA.

In the new study, scientists analyzed data that NASA's Cassini spacecraft collected of Titan's hazy, soupy atmosphere, and studied them in wavelengths of light that ranged from ultraviolet to visible to near infrared. They unexpectedly discovered that on Titan, "twilight is brighter than the dayside," study lead author Antonio García Muñoz, a planetary scientist at the Technical University of Berlin, told Space.com. [Titan in Photos: Amazing Views from Cassini]

To shed light on why Titan is so bright at twilight, the researchers analyzed how Titan's highly extended atmosphere scattered light. (Previous research found that since Titan is only about 2 percent Earth's mass, its gravity doesn't allow it to hold on to its gaseous envelope as tightly as Earth's does, so Titan's atmosphere extends to an altitude 10 times higher than Earth's — nearly 370 miles (600 kilometers) into space, according to NASA.)

Because Titan's atmosphere is both hazy and extends high up, at twilight, more light gets scattered onto Titan's surface than it does during the daytime "at all wavelengths investigated," García Muñoz said. In fact, based on computer models and Cassini data, twilight can be up to 200 times brighter than daytime, he added. [How Humans Could Live on Titan (Infographic)]

To understand why this happens, imagine Titan as a ball facing the sun. On the side directly facing the sun, it's daytime; on the side facing away from the sun, it's nighttime; and on the border between these sides, it's twilight. The haze particles in Titan's atmosphere tend to scatter light at a forward angle (meaning the light is deflected somewhat, but keeps going in the same general direction). The researchers' calculations showed it is possible that Titan's thick, dense atmosphere could scatter more light toward the twilight regions than the central daylight region, just like Cassini observed. In addition, since Titan's highly extended atmosphere sticks far out into space, a great deal of the photons that would pass right by the sides of a moon with a less-extended atmosphere instead get directed to the rim of the sun-facing side of Titan (above the twilight region).

These findings help scientists understand how much solar energy gets absorbed by Titan's surface and atmosphere, García Muñoz said. This in turn can shed light on how its weather and seas operate, and what conditions any life that may or may not exist on Titan's surface might face.

The researchers also suggest that similar surges in brightness may happen on distant exoplanets outside the solar system.

"If one could eventually detect a similar optical phenomenon at an exoplanet, then we could reasonably guess that the exoplanet atmosphere shares some similarities with Titan's. In particular, we could probably guess that its atmosphere is extended and hazy," García Muñoz said. "This is important, because determining the properties of exoplanet atmospheres is very challenging," and detecting this effect could help "inform us of their main properties."

The scientists detailed their findings online April 24 in the journal Nature Astronomy.