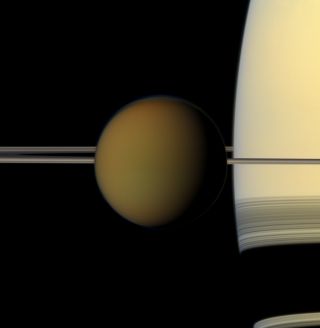 Saturn's largest moon, Titan, is visible in front of the planet and its rings in this photo taken by NASA's Cassini spacecraft, shown in true color.
(Image: © NASA/JPL-Caltech/Space Science Institute)

A strange cloud on Titan that seems to appear out of nowhere may form through process similar to one that depletes the ozone layer at Earth's poles. This process involves reactions with solid crystals rather than vapor.

The weird cloud, which NASA officials described as "impossible" in a statement, is made of dicyanoacetylene (C4N2), which is one of several hydrocarbons that give Titan's atmosphere it's orange-brown hue. One cloud just like it was first seen by Voyager 1, which passed by Saturn in 1980. Strangely, though, there didn't seem to be enough dicyanoacetylene in Titan's atmosphere to make such a cloud — only 1 percent of the amount needed.

Observations of this newer cloud, taken by the Cassini orbiter currently exploring Saturn's system, yielded similar results: The spacecraft saw a high-altitude cloud, but there was not enough raw material to make one. At first, the scientists thought the problem was that the Voyager instrument wasn't sensitive enough to pick up the dicyanoacetylene. But when Cassini got the same result, that explanation was scrapped, researchers said in the NASA statement.

Clouds are usually formed via condensation; a gas will rise to a certain height before cooling enough to turn to liquid vapor. This is what water does on Earth, forming clouds, and what methane does on Titan.

In the upper atmosphere, the process differs slightly; in that case, warm air is pushed to the poles and then sinks, where it condenses into clouds.

Carrie Anderson, a planetary scientist at NASA's Goddard Space Flight Center in Greenbelt, Maryland, led a team at Goddard and the California Institute of Technology that proposed a different model for those clouds' formation: reactions among solid ice particles.

Under this process, crystals of another hydrocarbon, cyanoacetylene (HC3N), would condense as the gas moves downward through Titan's upper atmosphere. On the way, the crystals get coated by hydrogen cyanide (HCN). The little coated particles get hit with ultraviolet light from the sun, and the result is a reaction that forms dicyanoacetylene ice and hydrogen.

This process is similar to one on Earth involving clouds that sometimes form in the stratosphere and chlorine-bearing chemical pollutants. The chlorine chemicals stick to the ice crystals, react when hit with UV light and create ozone-destroying chemicals.

The study appears in the journal Geophysical Research Letters.