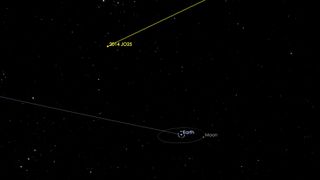 The path of Asteroid 2014 JO25 as it makes a close pass by Earth, coming to within 4.6 times the distance between Earth and the moon.
(Image: © NASA)

An asteroid will make a close flyby of Earth today (April 19), and the Slooh Community Observatory will be tracking the space rock's journey live.

During the close approach, the asteroid will be traveling at about 73,000 miles per hour (117,000 kilometers per hour) and will come to within 4.6 times the distance between Earth and the moon, or about 1.1 million miles (1.6 million km).

Slooh.com will host a webcast beginning at 7 p.m. EDT (2300 GMT) showing live views of asteroid 2014 JO25 on the day of its close pass by Earth. The webcast will also feature Slooh astronomers and other experts, who will discuss how the asteroid was discovered and how humans could stop a massive asteroid from hitting Earth. You can watch the webcast on the Slooh website here. Although the webcast begins at 7 p.m. EDT, the asteroid's closest approach will occur earlier in the day, at about 8:24 a.m. EDT (1224 GMT). Slooh's flagship telescope in Spain's Canary Islands, off the west coast of northern Africa, won't be able to see the asteroid during the day. [Photos: Asteroids in Deep Space]

You can also watch the webcast on Space.com, courtesy of Slooh. The Slooh webcast will feature one of Slooh's regular webcast hosts, Gerard Monteux, along with Slooh astronomers Paul Cox and Bob Berman, and Aten Engineering founder J. L. Galache. They will discuss the features of asteroid 2014 JO25, how it was discovered and "how we might stop an asteroid of this size should one be discovered on a collision course with Earth," according to the statement.

Stargazers may be able to see asteroid 2014 JO25 in the night sky with a telescope, according to NASA. The space rock will reach a peak brightness of about magnitude 11. (The brighter an object is, the lower its magnitude. Check out this guide to understand this brightness scale.)

The last time an asteroid this size or larger came this close to Earth was in 2004, when asteroid Toutatis, a 3.1-mile-long (5 km) space rock, came to within about four lunar distances of Earth, according to NASA. The next known close encounter with an asteroid in this size class won't happen again until 2027, when the half-mile-wide (800 m) asteroid 1999 AN10 will fly by Earth at just one lunar distance, or about 236,000 miles (380,000 km), according to NASA.

Editor's Note: Due to an error in the statement from Slooh. a previous version of this article incorrectly stated that the asteroid is traveling at 73 mph; it is in fact traveling at about 73,000 mph.