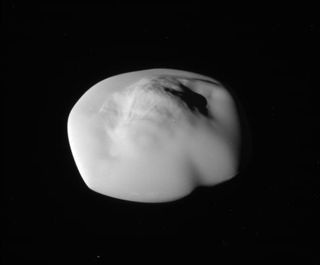 Well, sort of. On Tuesday (April 12), Cassini snapped the best-ever photos of Saturn's bizarre moon Atlas, whose humped middle and broad equatorial ridge make it look like a flying saucer. (The "ravioli" moon, by the way, is the Saturn satellite Pan, although some people think it looks more like an empanada.)

Cassini took the new photos during a flyby that brought the probe within just 7,000 miles (11,000 kilometers) of Atlas at closest approach. [In Photos: Amazing Color Maps of Saturn's Moons]

"These images are the closest ever taken of Atlas and will help to characterize its shape and geology," NASA officials wrote in a description of the images Thursday (April 14). "Atlas (19 miles, or 30 kilometers across) orbits Saturn just outside the A ring — the outermost of the planet's bright, main rings."

During its nearly 13 years in the Saturn system, Cassini has revealed just how weird, wonderful and varied the ringed planet's bevy of 60-plus moons is. For example, the probe has captured amazing images of Iapetus, which looks like a walnut, and Mimas, which is a dead ringer for the Death Star from the "Star Wars" films.

And Cassini discovered geysers of water ice, organic compounds and other materials blasting from the spherical satellite Enceladus' south polar region. Scientists have since concluded that this stuff is coming from a huge, potentially habitable ocean of liquid water buried beneath the moon's icy shell. (Just Thursday, researchers announced that this ocean appears to harbor enough chemical energy to support life.)

The $3.2 billion Cassini-Huygens mission — a joint effort of NASA, the European Space Agency and the Italian Space Agency — launched in October 1997 and arrived at Saturn in July 2004. (Huygens was a piggyback lander that touched down on the surface of the huge Saturn moon Titan in January 2005.)

But the Cassini orbiter's work is nearly done. Later this month, the probe, which is low on fuel, will begin the "grand finale" phase of its mission — a series of 22 orbits that will take it between Saturn's cloud tops and the edge of the innermost ring.

Then, on Sept. 15, Cassini will plunge into the planet's thick atmosphere in a death dive designed to ensure that the spacecraft doesn't contaminate Enceladus or Titan (both of which may be capable of supporting life) with microbes from Earth.