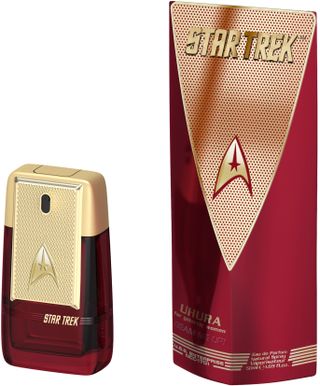 If you ever wondered what Capt. James T. Kirk, First Officer Spock or Lt. Nyota Uhura smelled like while working on the USS Enterprise, check out a new line of fragrances that draws inspiration from the famous "Star Trek" characters.

Lifestyle License, under license by CBS Consumer Products, plans to beam up the new smells to the European market. The men's and women's fragrances will come in individual 50-milliliter (1.7 cups) packages starting in June, Lifestyle License said in a statement.

Each perfume bottle resembles a "Star Trek" communicator, with the individual character fragrances coming in a color representing the character's uniform. Kirk's fragrance will come in a black package with gold detail; Uhura's will be red with gold detail, and Spock's will be blue with silver detail.

The composition of each fragrance is as follows:

"Star Trek" celebrated its 50th anniversary as a franchise in 2016, and a new CBS streaming-only series called "Star Trek: Discovery" is in production. A firm release date for the new series has not been announced, but CBS has pegged it for late 2017.