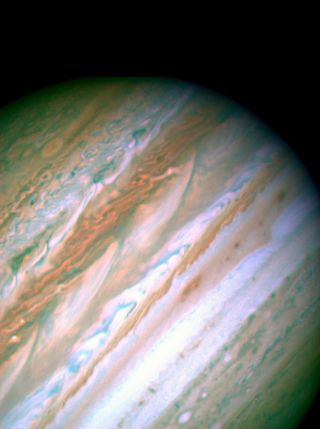 Tonight (April 7), Jupiter will be at its closest point to Earth for all of 2017, creating a spectacular view for both skywatchers and the Hubble Space Telescope, which will take full advantage of the proximity to scope out the gas giant.

The large planet is currently at opposition, which means that Jupiter, Earth and the sun form a straight line. When viewed from Earth, Jupiter is on the opposite side of the sky from the sun. During opposition, Jupiter rises near the time of sunset and sets around sunrise. Northern Hemisphere observers in mid-northern latitudes can see the planet in the southern sky just above Spica, the brightest star in the constellation Virgo.

Amy Simon, a planetary scientist at NASA, told Space.com in an interview that the planet's close approach — at the moment, Jupiter is "only" about 415 million miles (668 million kilometers) from Earth — means that Hubble can also get a more detailed view than usual. [Jupiter at Opposition - Hubble Snaps New Views of Gas Giant (Video)]

"The reason the opportunity is so great is that it's the biggest it appears in the sky," Simon said. "Opposition is a good time for Hubble to look."

Simon noted that the Hubble telescope could see details of the planet's cloud bands, and even wave-like features, in an image taken a few days ago. "We're learning a lot about Jupiter's weather," she said.

Though space probes such as NASA's twin Voyager spacecraft, Galileo and Juno can gather a lot of data as they approach the planet, Hubble has certain advantages. First, whereas the two Voyagers flew by the planet for just a week, Hubble has the chance to look much longer.

And although orbiters have more time to monitor the planet, they are limited to the specific areas they are designed to study. Juno, for example, which is currently orbiting Jupiter, is studying the planet's interior and magnetic field, and is less suited than Hubble is for certain weather studies. Notably, Hubble can see in ultraviolet (UV) light, which allows the telescope to study the giant planet's atmosphere closely.

The Hubble Space Telescope may also help Earthbound observers see if Jupiter's moon Europa is a possible home for life, by studying the composition of the plumes that seem to emerge from its surface. Last year, Hubble spotted possible water plumes via their UV emissions. "It's a way of getting access to the water without having to dig through the surface," Simon said.

The Great Red Spot has lasted centuries — it was first reliably observed in 1830, with possible sightings at least a century earlier — and winds in the giant, persistent storm have been known to hit 500 mph (800 km/h). "You'd really notice that," Simon said. The storm itself is so large, Earth could fit comfortably inside it.

"Jupiter is so interesting because it's a gas giant," Simon said. "We can watch weather in a different way." The planet's weather isn't constrained by a surface with mountains or oceans that can alter wind patterns, allowing large-scale structures such as the Great Red Spot to form and persist.

Still, there are some similarities: The wave-like features that Hubble saw on Jupiter's surface are quite like some types of waves that appear in Earth's atmosphere, for instance, Simon said.

Jupiter at opposition is also a good time for amateur skywatchers to see Jupiter's moons. Simon noted that, because the planet is visible all night, it is high in the sky at midnight, and its proximity to Earth makes Jupiter's largest moons — Io, Europa, Ganymede and Callisto — more visible even in small telescopes or binoculars.