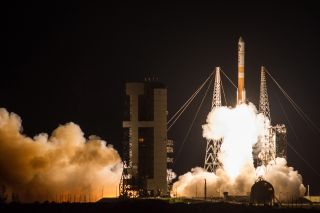 Built and flown by United Launch Alliance, the 22-story tall booster lifted off from Cape Canaveral Air Force Station here at 8:18 p.m. EDT (0018 March 19 GMT), soaring out over the Atlantic Ocean after a 34-minute delay to resolve an issue with ground support equipment. United Launch Alliance is a partnership of Lockheed Martin Corp and Boeing Co.

Once in position more than 22,000 miles (35,400 km) above the equator, the satellite, known as WGS-9, will join a constellation that provides the military's highest capacity communications service.

The WGS network is used to relay television broadcasts, video conferences, images and other high-bandwidth data to and from ships, aircraft, ground forces, operations centers, the U.S. Department of State, the White House and select partners worldwide.

The spacecraft support both X-band and Ka-band communications, which are parts of the electromagnetic spectrum used for data transmission. The satellites can seamlessly cross the bands to accommodate voice, data, video and other types of communications over a broad range of ground-based and mobile terminals.

In exchange for part-time use of the WGS network, Canada, Denmark, Luxembourg, the Netherlands and New Zealand picked up the $442 million bill to manufacture WGS-9.

The United States has a similar partnership with Australia, which paid for the WGS-6 spacecraft that was launched in 2013.

International partners receive proportional access to the bandwidth provided by the WGS constellation based on financial contribution, the Air Force said.

The 10th and final member of the WGS constellation is targeted for launch in late 2018.