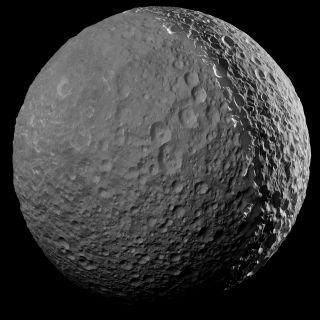 Saturn's moon Mimas as imaged by the Cassini spacecraft during its final flyby in January. The left side, lit only by reflected light, has been enhanced to better show the moon's features. The image depicts about 820 feet (250 meters) per pixel.
(Image: © NASA/JPL-Caltech/Space Science Institute)

The Cassini spacecraft snagged a final close-up view of Saturn's smallest major moon, Mimas, as it nears the end of its exploration mission at the ringed planet.

Cassini flew just 25,620 miles (41,230 kilometers) from the pockmarked moon Jan. 30, on the spacecraft's seventh and final flyby of the moon. Due to a massive crater on one side, Mimas is known as the "Death Star" moon — but this time, that crater is out of view. (Another recent Cassini photo, from a November flyby, highlights the giant Herschel crater.)

During the flyby, Cassini captured 10 images from about 28,000 miles (45,000 km) away that were combined into a mosaic. More than half the moon was lit only by reflected light from Saturn — one image has that side enhanced, to give a fuller view of the moon, and the other leaves it in shadow. Researchers combined the images from Cassini's narrow-angle camera to create a view like the one an observer would have seen through a powerful telescope, NASA officials said in a statement. [More Photos of Mimas, Saturn's 'Death Star' Moon]

This final Mimas flyby comes as Cassini wraps up its exploration of Saturn's system, begun in 2004. After a series of close flybys of the planet's rings, it will take a final plunge into the planet's atmosphere Sept. 15. The mission is a collaboration between NASA, the European Space Agency and the Italian Space Agency.

Besides being the "Death Star" moon, Mimas is also known for being Saturn's smallest and closest major moon, and for being among the solar system's most cratered surfaces. It circles the planet every 22 hours and 37 minutes, and has cleared a 2,980-mile (4,800 km) wide gap between Saturn's two largest rings. Based on the moon's density, it appears to be made mostly of water ice with a little bit of rock. Although it lies closer than nearby moon Enceladus, it shows none of the energetic geysers (and potential underground ocean) of that moon.