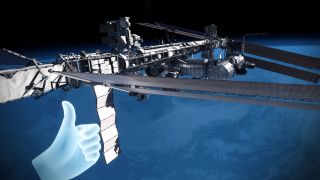 The "Mission:ISS" simulation, released yesterday (March 9), is available for free. It works with the Oculus Rift virtual-reality headset and the Oculus Touch motion controllers (reviewed on our sister site Tom's Hardware). Production company Magnopus made the simulation in collaboration with NASA, the European Space Agency and the Canadian Space Agency, the Oculus team said in a blog post.

"Based on NASA Space Station models as well as discussions with multiple astronauts and the VR Laboratory at NASA's Johnson Space Center in Houston, 'Mission:ISS' recreates the International Space Station in painstaking detail," they wrote.

In addition to performing mission tasks using the Oculus Touch, users will learn about the space station's history and hear astronauts' stories through several included videos.

The project also includes two very different types of outreach: A beta program will provide some high school students in the United States access to "Mission:ISS" and the necessary hardware, and the Rift will also be sent to space for astronauts to use on the orbiting lab.

"The Rift will be used for the first time in orbit by European astronaut Thomas Pesquet to test the effects of zero-gravity on human spatial awareness and balance using software developed by the space agencies," the Oculus team wrote. Space station astronauts have also worked with Microsoft's HoloLens headsets, which superimpose virtual-reality elements on the real world to be viewed through the headset, to test a system that guides technical procedures and repairs in orbit.