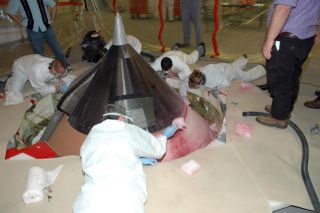 Theagency-wide video conference is evaluating ongoing repair work to the space shuttle Atlantis' externaltank, which sufferedextensive damage [image]during a freakFebruary hail storm that delayed the orbiter's STS-117mission to no earlier than late April or May. If tank experts decide to replacethe damaged tank with a pristine one, the swap would push the spaceflight toJune, NASA has said.

"It's anopportunity to be able to [update] everybody at once on where the engineeringanalysis is," NASA spokesperson Kyle Herring, of the Johnson Space Agency inHouston, told SPACE.com Tuesday of today's meeting.

Shuttlemission managers are expected to discuss today's meeting during a pressbriefing slated for no earlier than 5:00 p.m. EDT (2100 GMT).

NASA ishoping to launch Atlantis towards the ISS sometime between late April and May21, after which the angle of the Sun onthe station's solar arrays would hinder the outpost's ability to support an incoming shuttle crew untilJune 8, with that flight window running through about July 19, Herring said.

Sturckowand his five STS-117 crewmates must now wait until after a spacestation crew swap, expected to be complete by April 20, to launch towardsthe ISS. Their 11-daymission will deliver a newset of starboard solar arrays to the ISS.

Prior tolaunch, shuttle fuel tanks are filled with some 526,000 gallons of super-chilledliquid oxygen and liquid hydrogen propellant, which feeds an orbiter's main enginesduring liftoff. A protective layer of foam insulation prevents ice frombuilding up on the tank's aluminum surface and adds some protection fromaerodynamic stresses experienced during the 8.5-minute ride toward orbit.

NASA has keptclose watch on fuel tank foam integrity since the 2003 loss of the shuttle Columbiaand its sevenastronaut crew. A briefcase-sized chunk of foam fell from Columbia's tankduring launch, damaging the orbiter's left wing heat shield and leading to itsdestruction during reentry.

Since then,NASA as made a seriesof modifications to limit the amount of fuel tank foam shed during liftoff,but there was likely little the space agency could do to guard against the typeof storm that struck Atlantis on Feb. 26, agency officials have said.

WilliamGerstenmaier, NASA's associate administrator for space operations, told acongressional subcommittee last week that hail storm was so localized overAtlantis' Pad 39A launch site that, had the shuttle stood atop the nearby Pad39B site, it would likely not have suffered as much damage.