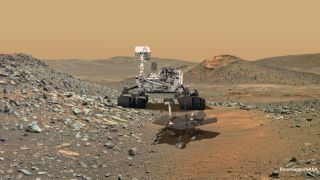 The search for Martian life may take NASA's next Red Planet rover to a site already explored by one of its smaller cousins.

Columbia Hills/Gusev Crater, which NASA's now-dead Spirit rover studied intensively from 2004 through 2009, is one of three finalist landing sites for the agency's next Mars rover, a life-hunting machine scheduled to launch in 2020.

Spirit found evidence of an ancient hydrothermal system, meaning Columbia Hills/Gusev once hosted liquid water and an energy source — two of the key ingredients necessary for life as we know it. [NASA's 2020 Mars Rover in Pictures]

"Because NASA's stated objective for the 2020 rover is to seek signs of past microbial life, the fact that we can point to possible signs of microbial life among rocks in the Columbia Hills is a major reason to go back," said Steven Ruff, associate research professor at Arizona State University's Mars Space Flight Facility in Tempe, Arizona.

"We know from a range of observations by Spirit that the rocks it found next to Home Plate, the ones composed of opaline silica, most likely formed in hot-spring discharge channels," Ruff told Space.com. "The remarkable similarities in their shapes, textures and mineralogy with silica rocks we found among hot springs at El Tatio, Chile, make the case."

Ruff pointed to samples picked up at El Tatio as being formed from a combination of biology and geology, so the possibility exists that Martian silica rocks formed the same way.

"We should go find out," Ruff said, referring to Mars 2020's destination.

The meeting involved more than 250 scientists and spacecraft engineers, who took part in person or via the Internet. After the meeting ended, the participants spent several days debating options and voting. They finally settled on three potential landing sites for the 2020 rover. In addition to Columbia Hills/Gusev, the researchers selected:

Another Mars 2020 landing-site workshop will be held next year. That get-together will further hone down the sites, but the final call falls to NASA headquarters.

For the most part, the 2020 rover will follow the landing playbook used by NASA's Mars rover Curiosity, which touched down inside Gale Crater in August 2012 and is currently exploring the foothills of the 3.4-mile-high (5.5 kilometers) Mount Sharp.

The 2020 Mars rover will experience the same "7 minutes of terror" entry, descent and landing scenario, which ends with the use of a rocket-powered sky crane lowering the rover onto Mars terrain. [7 Minutes of Terror: Curiosity Rover's Risky Mars Landing (Video)]

But the new rover features some updates that will make its landing special, said Allen Chen, entry, descent and landing lead for Mars 2020 at NASA's Jet Propulsion Laboratory in Pasadena, California.

Mars 2020 and Curiosity also have different mission goals. Curiosity is tasked primarily with determining whether or not Gale Crater has ever been capable of supporting microbial life — a question the rover answered in the affirmative early in its mission. But Mars 2020 will actually hunt for signs of past life.

The 2020 rover will drill and cache the most compelling astrobiological samples at the selected site for later pickup and return to Earth. Once transported back to our home world, specimens would be subject to the best scientific scrutiny that researchers can muster, given a bevy of powerful and innovative lab tools.

How to get samples home?

Just when — and how — these samples will make it to Earth is unknown; at present, there is no programmatic/budgetary go-ahead on a pickup mission.

It's possible that astronauts could be involved; after all, NASA is also working to get people to the vicinity of the Red Planet sometime in the 2030s.

"I've thought for a couple of years now that sending humans to pick up the sample cache in orbit around Mars would be a great way to advance exploration goals," Ruff said.

"I have joked that it would be like Apollo 8 going for takeout," he added, referring to the nonlanding human mission that orbited the moon in December 1968.

"We'd be exercising the hardware needed to get humans to Mars and back and completing a major scientific objective of returning Martian samples to Earth," Ruff said. "But if the development timeline for such a mission is substantially longer than a robotic sample-return mission, I'd have a different opinion."

There are those who remain less than excited about the upcoming rover mission.

"I am not very enthusiastic about Mars 2020," said Chris McKay, a research scientist at NASA's Ames Research Center in Moffett Field, California. "It will sure be fun to have another big rover on Mars, but I don't think it will advance the science much over Curiosity."

McKay underscored two things gleaned from Curiosity — items that seem to have been ignored, he said.

"First, to search for signs of life, we have to collect samples. 2020's approach to do all the in situ science with instruments that don't require a sample is a step backward," McKay told Space.com.

"The second lesson from Curiosity is that we need to get these samples from deep," McKay said. At old equatorial sites on Mars, "deep" means many meters, he said. In the polar sites — like the Phoenix lander site that was robotically explored in 2008 — 20 inches (51 centimeters) may be enough, McKay added.

McKay said the Mars 2020 rover will collect samples only from very shallow depths.

"I doubt there will be much interest in going back to Mars to pick up these samples," he said. "But certainly the coring and caching will be interesting technology demonstrations."

The 2020 rover isn't the only craft being prepped for a trip to Mars in the near future.

NASA aims to launch a lander called InSight next year, to investigate the Red Planet's interior structure. The life-hunting ExoMars rover, a joint effort of the European Space Agency and Russia's space agency, is scheduled to lift off in 2021, and China plans to launch its own Mars rover in that same general time frame.

And then there's SpaceX. Elon Musk's company intends to launch its uncrewed Dragon capsule toward Mars in 2020, with follow-up missions occurring every two years or so thereafter. Crewed missions aboard the company's Interplanetary Transport System could begin sometime in the 2020s as well.