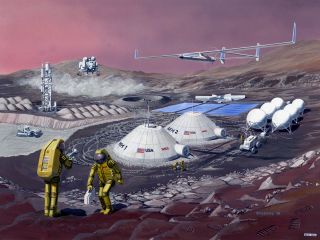 High performance materials and structures are needed for safe and affordable next generation exploration systems such as transit vehicles, habitats, and power systems.
(Image: © NASA)

NASA will spend up to $30 million over the next five years to set up and support two new institutes dedicated to helping humanity extend its footprint out into the solar system.

The two Space Technology Research Institutes (STRIs) — each of which will receive up to $15 million of NASA funding over a five-year "period of performance" — will aim to develop new technologies in the fields of biomanufacturing and materials, agency officials said.

"These university-led, multidisciplinary research programs promote the synthesis of science, engineering and other disciplines to achieve specific research objectives with credible expected outcomes within five years," Steve Jurczyk, associate administrator for NASA's Space Technology Mission Directorate, which is funding both STRIs, said in a statement. [NASA's Top 10 Innovations of All Time]

"At the same time, these institutes will expand the U.S. talent base in areas of research and development with broader applications beyond aerospace," Jurczyk added.

One of the new STRIs — the Center for the Utilization of Biological Engineering in Space, or CUBES — will focus on using microbes to make food, fuel, materials and pharmaceuticals. Such a biomanufacturing system could make astronauts more self-sufficient when they voyage through deep space or set up outposts on distant worlds, NASA officials said.

The other STRI, the Institute for Ultra-Strong Composites by Computational Design (US-COMP), will aim to develop a superstrong and extremely lightweight new aerospace material based on carbon-nanotube technology.

Though CUBES and US-COMP are devoted primarily to advancing space technology, the work of both institutes could find applications on terra firma, NASA officials said. For example, CUBES plans to use carbon dioxide as a base for its materials manufacturing; the technology may therefore prove useful for managing this greenhouse gas in Earth's atmosphere. And the new materials developed by US-COMP could make their way into a variety of products, agency officials said.